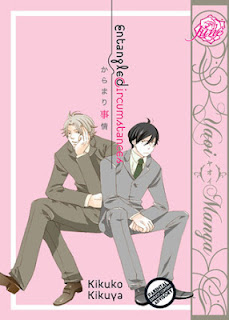 Entangled Circumstances
Author: Kikuko Kikuya
Digital Manga Publishing
200 pages
Himeko and Shibui not only work for the same company, but had also attended university together. Himeko was wildly popular, and nicknamed "The Prince." But whatever Shibui may be trying not to recall about their shared past, one thing is certain - their present and future are tangled together, with the past knotting it quite firmly. Seeing Himeko everyday, Shibui finds his feelings ever more swayed. "Whatever it takes to get you..." (Source: Goodreads)
I have conflicted feelings about Entangled Circumstances, the first Kikuko Kikuya title I've read. It's a great book and a great bit of writing and art, but some of the issues presented within its pages have questionable ethics behind them. Which is not to say that Entangled Circumstances is a bad manga. Because it isn't! It's a good manga and a good yaoi to boot, but it has issues that it doesn't really deal with to any great extent. However, I would recommend this book to boys' love fans, with some minor caveats.


Basically, the story of Kikuko Kikuya's one volume manga Entangled Circumstances is about two men with a complicated history that end up working together in the same company. Naturally, this history between them comes into play as a reluctant Shibui finds himself drawn to the company "Prince" Himeko.
It's a work place romance in only the simplest of terms, since it did not start at Cupido Magazine but during their high school days. Their job does factor into their relationship, though, as they are both careful not to let their colleagues know what is developing between them. Also, we see their work environment and how they are at their jobs, which adds another dimension to these characters. I especially liked how Himeko took care of a printing error in his usual "Prince" manner.
The character of Himeko troubles me. He forces (literally forces, mind you) his feelings upon Shibui, spends a lot of time repenting for his mistakes, but ends up seducing Shibui anyway. It feels like he's feeding into a stereotype of the gay guy who chases straight guys with the intention of 'turning', usually in a predatory way, although Kikuya manages to subvert said trope in the eleventh hour, as well as making him feel sorry for coming onto Shibui like he did initially.
The artwork of Entangled Circumstances is pretty adorable; Kikuya can draw a mean blush on a cute guy like whoa. She's also really good at having characters display emotions during the more dramatic scenes. In the end notes, Kikuya claims to have failed at showing how beautiful Himeko is supposed to be - but I think that's typical manga-ka modesty coming through, since Himeko seems really handsome in the book! Plus, handsome guys in suits in an office? Heck yes, do want.
Overall, despite its issues, Entangled Circumstances is a solid read and well worth your time, so long as you understand that Himeko is not your perfect BL protagonist and that his and Shibui's relationship is complicated in many ways. Based on her storytelling skills and art style, I'll definitely be looking out for more titles by Kikuko Kikuya in English.
For more information on DMP titles, releases, and the latest news, visit the Digital Manga Inc.'s website: http://www.digitalmanga.com/
Posted by Sarah at 1:51 PM