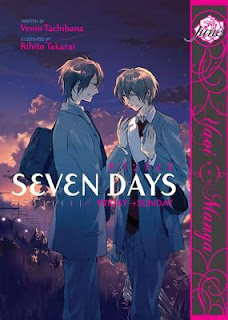 What started out as a personal dare on a Monday becomes a little awkward on Tuesday, but quickly turns warm and comfortable on Wednesday. Now, could it be that love begins to blossom on Thursday? Of course, there's a catch. While Seryou does go out with the first girl who asks him out on a Monday morning, by the end of the week, he will break up with that person. With three days remaining in the week, will Touji continue with his routine or are his feelings for Yuzuru reason enough to break the rules? (Source: Goodreads)
The first yaoi title I ever reviewed for this blog was the first half of Tachibana and Takarai's Seven Days series, in which Shino first asked Seryou out and they began to date, only to find out their week of courtship is more complicated than they thought. After a mess of emotional issues and ex-girlfriend problems, the fate of Shino and Seryou was still up in the air. Just in time for the 801 Manga Moveable Feast, it's time to revisit their story and see how they week ends - and whether it ends with them together or apart.


In the second and final volume of Seven Days, Shino is reluctantly counting down the days until the inevitable: Seryou breaking up with him, as he has done with all the girls before him. Actually, Shino is currently a whole bundle of neurotic hang-ups, as he is very much worried about Seryou leaving him behind at the end of the week. He's also worried that Seryou is still fixated on his past girlfriend, the lady who is also named Shino and who oh so unhelpfully and accidentally wedges herself between the two of them during an unplanned trip to Seryou's place. 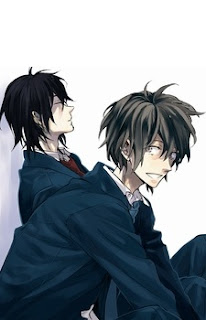 In contrast to Shino, Seryou seems to be clearly infatuated with Shino in his own way, although he's not doing the best job of coming out and saying it, or else Seryou wouldn't be so nervous! He loves to be called a 'masochist' by his blushing boyfriend. Unfortunately, he also has a bad habit of pushing aside important things, like his own 'weekly girlfriend' rule that even extends to Shino, and the fact that when Sunday rolls around, he'll have to make a very important decision: break up with Shino or keep going with this new relationship?
At this point of their relationship, Shino and Seryou are still trying to figure each other out, what their likes and dislikes and various quirks. After all, they are two teenagers navigating a weird courtship born out of Seryou asking Shino out on a whim. And according to what I've been reading into this series, this is probably their first same-sex relationship, so they also have to deal with their classmates watching them and wondering how close as friends they are. They also have personalities that clash a bit, what with Seryou being so withdrawn and Shino being rather direct to the point of being thoughtless at times.
I like what Shino's little sister says about him - that he doesn't really give much thought into how other people think and that he does what he wants with little regard for others - and that Seryou responds with, "It causes you trouble, huh? But that's part of who Yuzuru is too". No one is trying to permanently change the other person's true self. Even as he's struggling with his connection to Shino, Seryou understands that he accepts Shino the way he is. Then again, that is the kind of person Seryou is - someone who makes sure those around him are comfortable with him and feel safe in his presence.
In the end, I think the scene at the end with Seryou having archery troubles perfectly captures his relationship with Shino and what their love means. It's not something that can be rushed. It's not something that can be slowed down. They have to find the perfect pace meant for them, that both Seryou and Shino can live with. Even if it is one week at a time. Although judging by the post script, it obviously works out very well for the two of them! 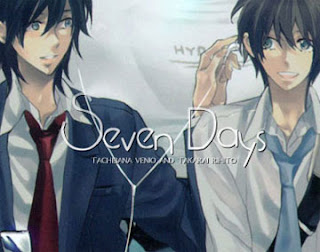 I also must point out that Tachibana does a good job at developing secondary characters, especially female ones. Although I wish Shino's little sister had been given a name! I'm also glad that Shino did not outright cruelly break the heart of the young women who came around to ask him out. I did find Seryou's jealousy over the one archery girl's friendship with Shino kind of amusing - I don't think Seryou fully realized how protective he had become of someone he was only initially dating for a week. Poor jealous Seryou!
I really enjoyed the Seven Days series overall. For two volumes covering an entire week in the lives of two young men, it packed a lot of genuine emotional moments and character development, as well as some lovely artwork from Rihito Takarai. I also think it makes a great addition to the yaoi/BL series which have already been reviewed for the 801 MMF this year. I would definitely love to read more BL stories by Venio Tachibana in the near future.


For more information on DMP titles, releases, and the latest news, visit the Digital Manga Inc.'s website: http://www.digitalmanga.com/
Posted by Sarah at 2:54 PM