What can I say? I was inspired, somehow, despite the fact that midterms were last week and I have a paper due tomorrow morning. I hope y'all enjoy this latest Wednesday Brief piece: it's another stand alone original, and appropriately creepy, given Saturday is a creepy holiday. Sorry, no yokai in this one (although I considered it as a possibility)!

Torch Song For A Night Ride. Prompts used: a train, it's good to have dreams.


The sound of the ten o’clock express hitting the tracks was enough to wake Peter from what had been a very deep nap. He opened one eye, slowly, to see the red blinking light display the time from across the darkened room. Moonlight from the semi-opened window created a grey path that connected the foot of the bed to the faraway dresser.

It had only been about an hour since Peter lay back onto the bedspread, fully clothed, and attempted a decent nap time twice as long as he actually slept for. Papers were spread out on his desk in fan shapes, a desperate method of concentration based on the placement of objects that only worked half the time. A red pen sat on top of the mess, awaiting further instructions. 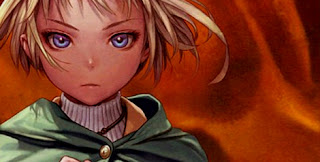 I am, for whatever reason, utterly fascinated by the choices some authors make when they decide to write spin-offs for their main (and very popular series). In particular, I've been reading Reki Kawahara's SAO light novel spin-off along with the Attack on Titan spin-off from Hajime Isayama and Ryo Kawakami. It might be comparing apples to oranges in a way, since Isayama is actually not the primary author of this particular spin-off, but ultimately the franchise origin writer chooses what stories are told in the spin-offs. And that choice is what is worth examining, especially when one spin-off explicitly marks itself as 'progressive'.

Sword Art Online Progressive (books 1-2): Kirito and Asuna are two very different people, but they both desire to fight alone. Nonetheless, they find themselves drawn together to face challenges from both within and without. Given that the entire virtual world they now live in has been created as a deathtrap, the surviving players of Sword Art Online are starting to get desperate, and desperation makes them dangerous to loners like Kirito and Asuna. As it becomes clear that solitude equals suicide, will the two be able to overcome their differences to find the strength to believe in each other, and in so doing survive?

Attack on Titan - The Harsh Mistress of the City (book 1): With Wall Maria breeched, communities within the Quinta district have been cut off from each other creating famine and chaos. A young field commander named Rita is tasked with a mission to reconnect transit across the massive district while putting her troops and residence right in the vanguard as Titans descend on her town.