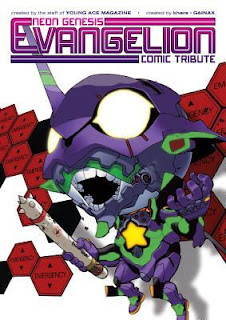 Neon Genesis Evangelion: Comic Tribute
Authors/Artists: Listed below
Editor: Young Ace Magazine
Dark Horse Comics
156 pages
If you thought Evangelion's characters have a tough time in the anime, wait until you see what happens when some of Japan's most unhinged manga artists get their ink-stained hands on them! Neon Genesis Evangelion: Comic Tribute is an officially authorized one-shot anthology of parody stories assaulting Evangelion from all directions. Inside, Mine Yoshizaki (Sgt. Frog) leads a band of manga pranksters including Hideki Ohwada (The Legend of Koizumi), Yun Kouga (Loveless), Nawoki Karasawa (Sake Jock, Super Cruel and Terrible Tales of Manga-ka), Yoko Sanri (B Gata H Kei: Yamada's First Time), ComiPo! mastermind Keiichi Tanaka, Rui Takato (Cynthia the Mission), Astroguy II (Queen's Blade Struggle), Kotaro Yamada (The Sacred Blacksmith), Sessyu Takemura (Domin-8 Me!), Jun Abe (Portus) and Tony Takezaki (Space Pinchy. A.D. Police). Also contains contributions from normal people, like Rikdo Koshi (Excel Saga). (Source: Dark Horse.com)
I never thought I'd be reviewing a doujinshi collection but that is exactly what Dark Horse Comics has presented us: a collection of doujinshi shorts centered around Neon Genesis Evangelion, written and illustrated by a wide variety of established manga-ka (although most of them are better known in Japan than in the United States). Dark Horse seems to be the place to go for Evangelion spin-off manga since Viz has the actual manga firmly in its grasp for eternity. Honestly, as far as short collections go, it's not the worst but it certainly won't appeal to everyone, especially casual fans who aren't tuned in to every reference and in-show nuance of Evangelion's ever-growing canon.
Read more »
Posted by Sarah at 2:48 PM No comments: 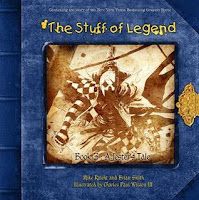 The Stuff of Legend Book 3: A Jester's Tale
Author: Mike Raicht and Brian Smith
Artist: Charles Paul Wilson III
Del Rey/Th3rd World Studios
124 pages
Continuing the saga of the New York Times Bestselling Graphic Novel. Following the shocking revelations of The Stuff of Legend Volume 2: The Jungle, Jester embarks on a solo quest that will take him to the farthest corners of the Dark. High seas adventure awaits in The Stuff of Legend: A Jester''s Tale #1. (Source: Goodreads)
Yes, I am pleased to report I did not wait another year to read the next book in the Stuff of Legend series. Which is good because after the second book, it was hard to stay away. This book is split up between three narrative paths: the boy, the Jester, and the main group, everyone fighting to find their own way through the world of the Dark. Another kink is thrown into the works with the introduction of a character with his own agenda who looks an awful lot like our dear Jester and is indiscriminantly causing havok wherever he goes. What else could go wrong?
The character who gets the bulk of the story this time is Jester, who is on a foolhearty quest to rescue his Native American princess. He's usually been my favorite character, but in this volume he was a bit disappointing, especially towards the end of the book. His chivalrous side is going to be the end of him. Still, his usual charming self holds up well under pressure – and there's a lot of that on his head. I hope the other Native characters seen in the tail end of this book get more development because at this moment, they verge dangerously on stereotype – and I know this series can do better than that.
My favorite sections of this volume have to be around the boy and his friend on the train. It was nice to see the boy become less and less passive in his role as the Boogeyman's captive. I saw the plot twist surrounding these particular scenes – which makes up the third volume's cliffhanger – coming about six to eight pages before it dropped, but I still felt a chill reading it unfold. And with that particular cliffhanger, as well as the dangers facing our intrepid band of rescuers, I'm really looking forward to book four in this series. Can it be sooner than later, pretty please, Mister Raicht and Mister Smith? 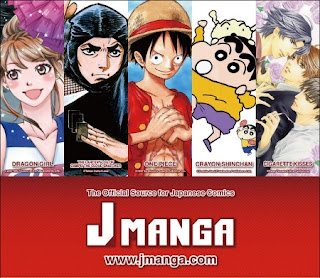 What are you thinking about this week? Please share your thoughts and feelings in the comments section. 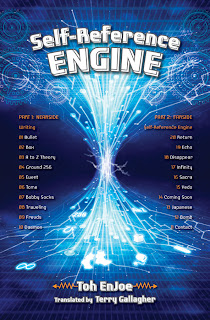 SELF-REFERENCE ENGINE is available now and carries an MSRP of $14.99 U.S. / $16.99 CAN. An eBook edition is also available for the Amazon Kindle, Apple’s iBooks Store, the Barnes & Noble’s Nook Books Store, and the Sony Reader™ Store.

So this year I actually covered Kawakon (the Saint Louis based anime con) as a member of the press, complete with press badge and everything. I even did video interviews with several convention guests! I then shoved all said video off on my long-suffering nakama Aaron, who did a great job editing and making them presentable (and he did a REALLY GOOD JOB TOO). And now they're all online!

Below is my video interview with two members of Three Rivers Okiya. You can find my other interviews with guests like Professor Shyguy and Shane Moore at Aaron's Youtube channel, ALinderVideo. I'm especially proud of the Shyguy interview! Spoiler: it's a long 'un.


In retrospect, I could have done a few things better. I could have presented as less nervous, prepared better for interviews, and brushed my damn Hermione Granger mane better. I also totally should have interviewed the Simon Petrikov cosplayer I met on Saturday! He was boss. I guess that's part of being a student journalist: every day is a learning experience. Perhaps Natsucon 2013 will be my second chance at doing it even better.

What time is it? It's . . . Fujoshi O'Clock, the biweekly feature at Nagareboshi Review, when I bring to you the latest fujoshi-related news and reviews and various shiny BL-flavored things. Why? Because rotten girls need love too!

Aku no Hana PV Is Online

Below is the promotional video for the anime adaptation of the manga Aku no Hana by Oshimi Shuuzou, a title currently available in English via Vertical Inc.


A few things of note:

1. The video is very subdued - the music, the atmosphere, the art. It adds to a very tense, creepy atmosphere, which I think is what Aku no Hana is going for.
2. Other than that, there's very little to go on story-wise. It's intriguing but there's no real plot points jumping out at me.
3. No characters? I mean, slight shots of people but I don't see any actual figures emerge yet. For a series that is supposed to be rather unique in its animation with its use of rotoscoping, the lack of any real rotoscoping work in the PV is worrisome.

For those who have read the Aku no Hana/Flowers of Evil manga, what do you think?

Blog will be on hiatus until I feel well enough to post things of substance again. My apologies!
Posted by Sarah at 11:22 AM No comments:

Email ThisBlogThis!Share to TwitterShare to FacebookShare to Pinterest
Labels: hiatus 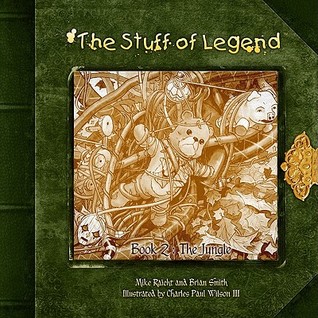 Unsuccessful in their quest thus far, the band of heroic toys travel farther behind enemy lines in search of their human master. There they uncover the true history of the mysterious closet realm known as the Dark in the bombed out husk of a ruined Zoo. Battle weary and vastly outnumbered by the armies of the cunning Boogeyman, Maxwell the teddy bear and Percy the piggy bank lead their troops into the savage wilds of the Jungle in search of sanctuary. (Source: Goodreads)
I reviewed the first book of the Stuff of Legend graphic novel series ages ago, always intending to return to this stellar series. That was over a year ago. Whoops? Nevertheless, I have returned to this strange dark world of war and toys, and I find myself loving it even more now than before. If you thought Max and the other toys were in trouble before, you haven't seen anything yet.
In this volume, loyalties are tested and broken, new enemies emerge, and the boy gets into his own trouble. We also see more of the Boogeyman's army and the viciousness that happens among his ranks in the name of earning his favor. Despite being toys, there are no static individuals here. Everyone has a story, a set of aspirations, adding further depth to the overall story. The dramatically inked artwork, with its striking use of shadows and sepia, sets Stuff of Legend apart from its fellow comics.
My favorite character at this point is the Jester. He has a dark dry sense of humor, can be quite vicious on the battlefield, and is hopelessly devoted to the Princess. However, he never loses sight of who he is and is constantly reminding us, the reader, that he is not a nice person or deserving of our affection. It's quite sad, really, but this is how Jester sees himself: someone who cannot be loved. I also feel for Harmony, who is burdened with the rifle of a past comrade but cannot bring herself to use it. She is obviously not a fighter but has been thrown into a situation where she will have to fight, if she wishes to live.
The more I read of The Stuff of Legends, the more I wish to learn about this odd world and how it functions. Fans of series like Mushishi and XXXHOLiC and Pet Shop of Horrors - where everything is not what it seems - should definitely give Raicht and Smith's series a try. And then maybe be a bit wary of how you treat your action figures and plushies.
Posted by Sarah at 10:31 AM No comments: 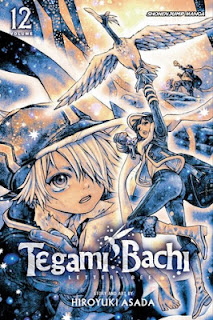 Tegami Bachi volume 12
Author: Hiroyuki Asada
Viz Media
200 pages
Spoiler warning: Review contains spoilers for the Tegami Bachi series so far. Read on with caution!
As the ferocious Gaichuu Cabernet closes in on the capital of Amberground, the Letter Bees form an army to stop it. Lag is paired off with a novice Bee who informs him that he’s become a legend in the Beehive. But Lag’s reputation as the “Child of Light” won’t do him much good against the terrifying power of Cabernet…or the dark secret he’s discovered about his hero, Gauche Suede. (Source: Goodreads)
To say I adore Tegami Bachi would be quite an understatement. To see why I adore Tegami Bachi, just look at volumes like this one, volume twelve in a still ongoing series. The plot is really chugging away in this one, as the hunt for Cabernet goes into full attack mode, putting Amberground on high alert against the flying Gaichuu. As everyone is put on the offense, poor Lag Seeing is still reeling from the revelation about Gauche - but has little time to resolve his feelings as he is sent to the front lines with a fellow Letter Bee in an attempt to cut off Cabernet from the city. Yay, action!
Read more »
Posted by Sarah at 9:26 PM No comments: