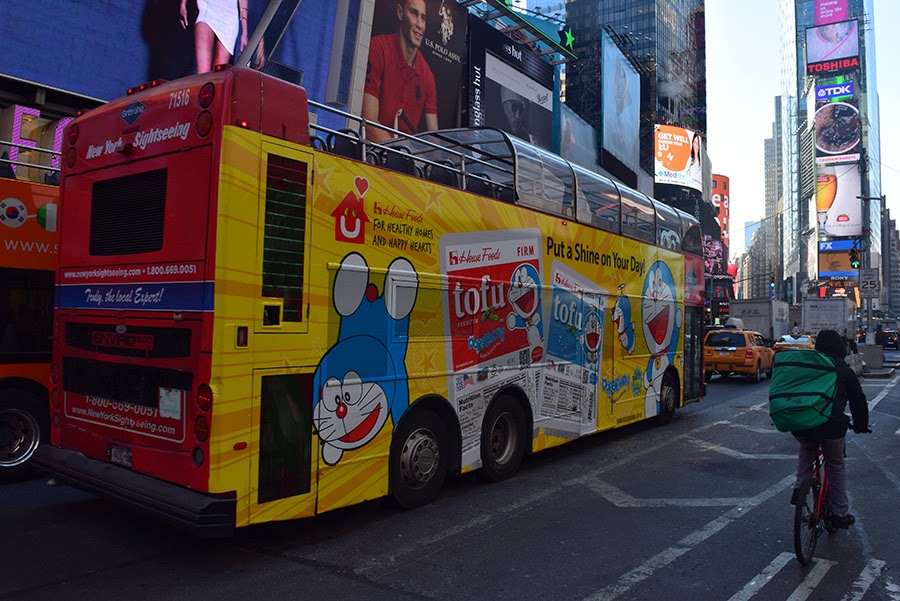 Nice to see that Viz Media is still rolling out Doraemon to the American audience, even with these wacky bits of promotion. I'm not sure how widely available House Foods products are but they seem mostly available in California and New York and related markets for now.

VIZ Media has announced that House Foods America Corporation is integrating Japan’s beloved cat-type robot character on the packaging of its tofu product line. VIZ Media is the North & Latin American master merchandise licensee for the celebrated anime property, overseeing the licensing and development of a range of products across a variety of consumer categories.

A special Lunar Chinese New Year sweepstakes set to be promoted through the House Foods website (www.house-foods.com) and Facebook page (www.facebook.com/housefoodsamerica) will run from February 1, 2015 through March 15, 2015. Consumers and DORAEMON fans are invited to enter to win the Grand Prize: one of five Amazon Kindles; thirty First Place winners will receive an official DORAEMON t-shirt.
Read more »
Posted by Sarah at 12:28 PM No comments:

What time is it? It's Fujoshi O'Clock, a regular feature at Nagareboshi Review, when I bring to you the latest fujoshi-related news and reviews and various shiny BL-flavored things. There is also a focus on trans and bisexual anime/manga. Why? Because rotten girls need love too!

Oh boy, my first "posting's gonna slow down from here on" post of the year! And by oh boy, I mean aww man.

I just became a full-time student again this year, so until I iron out my class and work schedule, posting here will become sporadic. Well, more sporadic than usual. But I shall be posting!

I know I owe a Fujoshi O'Clock post and I also have the two newest Soul Eater manga books (err, Soul Eater and Soul Eater Not!) to review, so that's two things to look forward to. Also, hopefully I will be finishing the Shikabane Hime: Aka anime and writing about that soon.

Thank you for reading my blog and pardon the tumbleweeds as I work things out scheduling wise!
Posted by Sarah at 3:19 PM No comments:

Email ThisBlogThis!Share to TwitterShare to FacebookShare to Pinterest
Labels: blogging

Now's The Time To Get Your Ecchi On

Some of the select titles on sale include Love on the Job (for which a promo video is included at the bottom of the post), the Parasite Doctor Suzune and Tender Hearts. Titles except for Range of Love are available as both print and digital.

You can take advantage of this sale at the Project-H website. The site is for users 18+ years only, so remember that before you click on the link. 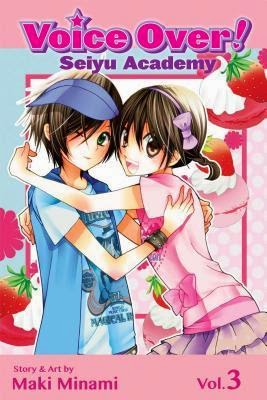 Voice Over! volume 3
Author: Maki Minami
Viz Manga/Shojo Beat
192 pages
Hime just got her first big break in voice acting, but it means she has to move out of her house and pretend to be a boy! Her new manager, Yamada, is willing to put in the extra time to train her personally, and Hime's hope of being a voice actor seems close to being fulfilled. But Yamada insists that he'll only use her for male characters. Will she have to give up on Lovely Blazer to see her dream come true?
After volume two of Maki Minami's latest shojo series, Voice Over/Seiyuu Ka, I was expecting volume three to focus more on Hime and her VA school group as they prepare for their next performance. Instead, what I got was a fun and slightly dangerous romp through the forest as Hime spends a weekend in a voice acting retreat with school duo fave Aqua.
As with any good forest retreat involving teenagers, a possible relationship forms and drama ensues. Plus, Hime gets flicked on the forehead a lot by Yamada, her manager who has no problem pushing Hime to her limits to hear her famous prince voice. Even though the scope has narrowed to focus on just Hime's goals as a VA, I enjoyed it as much as if the whole crew was present.
Read more »
Posted by Sarah at 7:58 PM No comments:

As the first Wednesday Brief of the year, I thought it would be interesting to reintroduced the world of Washed Right Out, my current flash fiction series, with a prequel of sorts. Use the series tag to get caught up on all the previous story chapters if you haven't before reading. I hope everyone enjoys the first official flash of 2015!

Five Short Rinses, a series of side-stories to Washed Right Out. Prompts used: have a character bake a cake, a snowstorm, taxi, hand washing.
Note: contains plot-related spoilers for the previous 14 chapters of Washed Right Out.
1.
The color of the frosting was the same as Karen's hair: pastel green. Both even had swirls running through them.
Read more »
Posted by Sarah at 11:30 PM No comments: 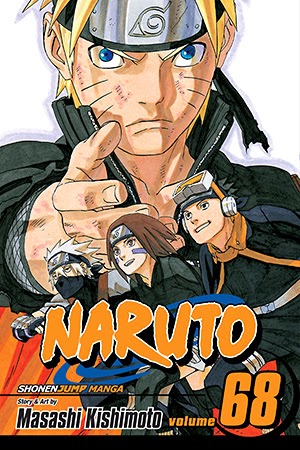 Naruto volume 68
Author: Masashi Kishimoto
Viz Media/Shonen Jump
192 pages
Spoilers for the current arc of Naruto, up to chapter 657.
Path: Even as the Shinobi Alliance’s resolve begins to falter in the face of Obito’s overwhelming power, Naruto refuses to give in. But how can he turn the tables with the odds so stacked against him? Can Naruto and Sasuke work together long enough to lead the ninja world to victory?!
The first 90 percent of this volume of Naruto is pretty good. We have shinobi working across village and country lines against Obito, Naruto and Sasuke teaming up yet again in the name of saving the ninja world, and a good amount of action in every chapter. It's a shame the last ten percent had me wanting to throw the thing across the room. Basically, Kishimoto decided that one final boss wasn't enough. No, he added yet another one. And at that point, I nearly screamed.
In this book, all of the action quickly boils down to the fight between Team Naruto and Sasuke versus Team Obito. It's obvious that both Naruto and Sasuke's powers have blossomed in unfathomable ways since they last fought, and their abilities joined together is hard to beat.
Read more »
Posted by Sarah at 6:40 PM No comments:

Shikabane Hime Has The Wrong Protagonist, And It's Killing The Show 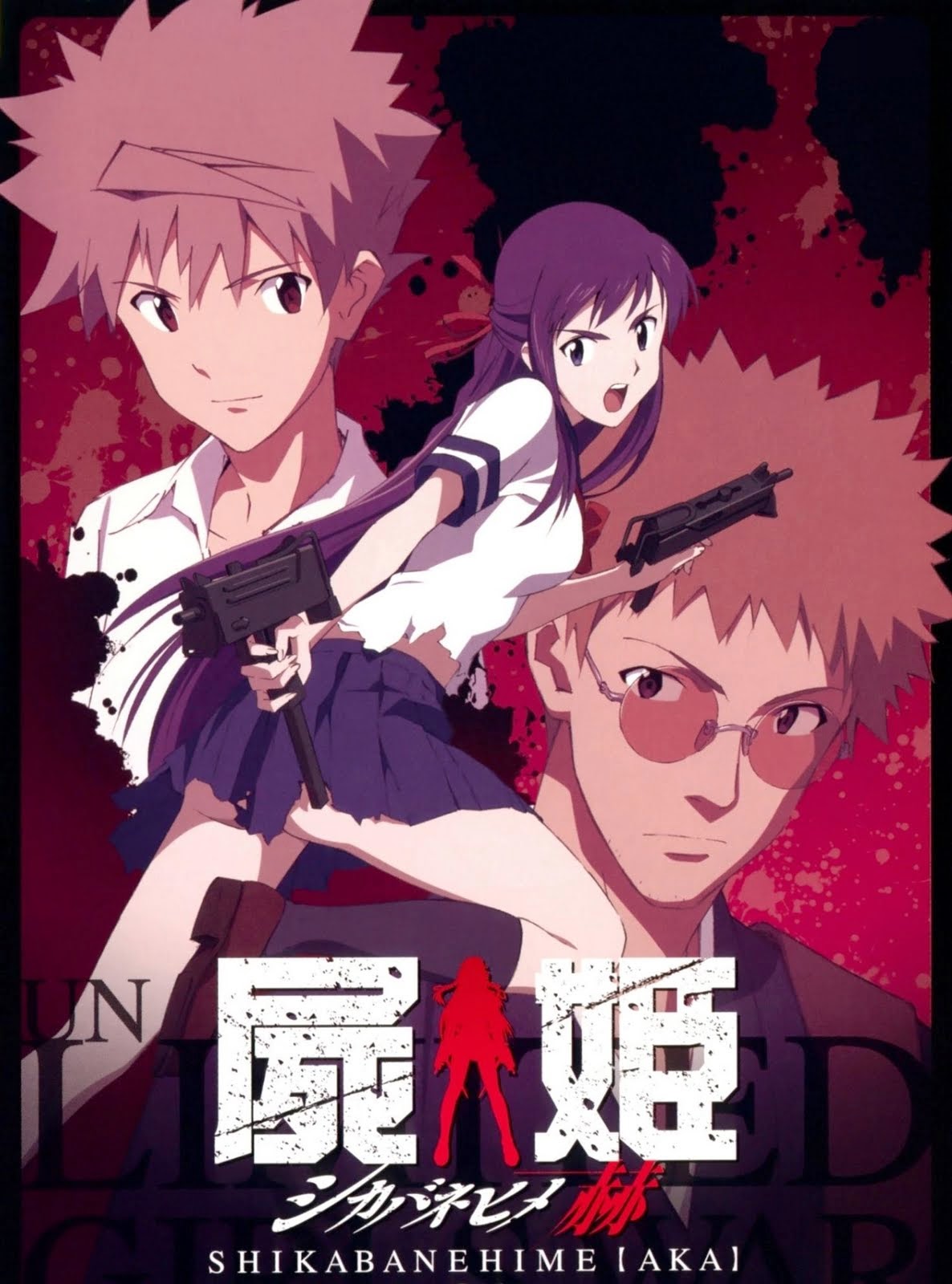 After being brutally murdered along with her family, Makina Hoshimura turns into a Shikabane Hime, a living corpse contracted to the Kougon Cult, in order to exert revenge on the mysterious undead organization responsible for her death. She is assisted in this task by Keisei Tagami, her contracted priest and former friend. This series follows the story of Keisei's younger brother Ouri, a boy with an unusual attraction to death, who slowly discovers his brother's secret and gets dragged into the world of the Shikabanes.

Shikabane Hime's lead protagonist is terrible. He's boring. He's milquetoast. He's bland. He's unappealing. He is Ouri Tagami, teenage boy who literally stumbles into the world of Shikabane and has spent the series so far trailing after Makina, a gun-toting badass who has more personality in her undead wrist that Ouri does in his whole body.

The whole situation is entirely unfair. Shikabane Hime is a good series - it has a lot of very interesting ideas, the world building is interesting and has a lot of moving parts, and there's a steadily growing cast of characters that further flesh out this world and the continuing battle against the undead of Japan. But then it sticks us with Ouri as our go-to hero, the kid with no powers and no weapon in a series where everyone else can flip ninja kicks and shoot guns and perform spells.

Shikabane Hime has so much going for it, but it keeps returning to the everyday life of this boring kid and his boring thoughts. Why Ouri? Why us?

VIZ Media opens 2015 and offers fans a fun way to begin the New Year with fresh digital manga for January.

The company also has extended its holiday digital manga promotion thru January 15th. Take advantage of this special opportunity to save up to 70% off on digital manga volumes across scores of favorite series featured on VIZManga.com and the VIZ Manga App. Many volumes are available for only $1.99 each. Also check other digital manga partner sites for similar special pricing.

Readers can look forward to the launch of five brand new manga titles throughout the month, including the shojo series, METEOR PRINCE, DRAGON BALL Z creator Akira Toriyama’s quirky comedy JACO THE GALACTIC PATROLMAN, and the release of SHIRAHIME-SYO and DUKLYON: CLAMP SCHOOL DEFENDERS, by the legendary manga creative team of CLAMP. Also scheduled to make its digital debut in January is the post-apocalyptic cyber thriller, THE THIRD.

Birth Rites and Testimonies: On Reading Children of the Sea 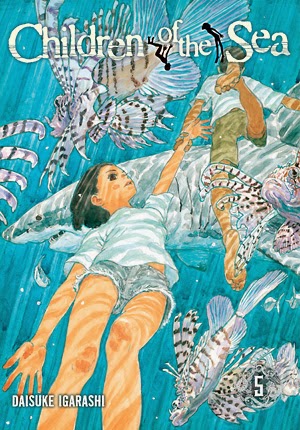 One summer vacation, Ruka meets two boys, "Umi" and "Sora," whose upbringing contains strange and wonderful secrets. Drawn to their beautiful swimming, almost more like flying, Ruka and the adults who know them are intertwined in a complex mesh... (Source: SigIkki)

This weekend I finished reading Daisuke Igarashi's Children of the Sea, a Viz Manga/SigIkki seinen release. It's taken me years to finish this manga. It's so beautifully drawn and intricate in plot and visual that I didn't want it to end, thus why I took forever to read the fifth and final volume. The wait was worth it.

This Igarashi manga is billed as a mystery and Wikipedia calls it an adventure, which are both accurate in their own way, but overall it's a fantasy of the world. Like the sea, the deeper you get into it, the more opaque it gets. For many, that can be a distraction from the story. People want answers, and for a mystery, this series isn't concerned with finding answers.

Yet when you break through the other side with Ruka at the end of her journey, being opaque makes sense. It fits with the series, with the characters and their narratives. This series encompasses death and rebirth and a sense of oneness that never feels forced. It's a beautiful thing to read.

Email ThisBlogThis!Share to TwitterShare to FacebookShare to Pinterest
Labels: children of the sea, manga

Review of the Reviews: My Favorite Posts of 2014 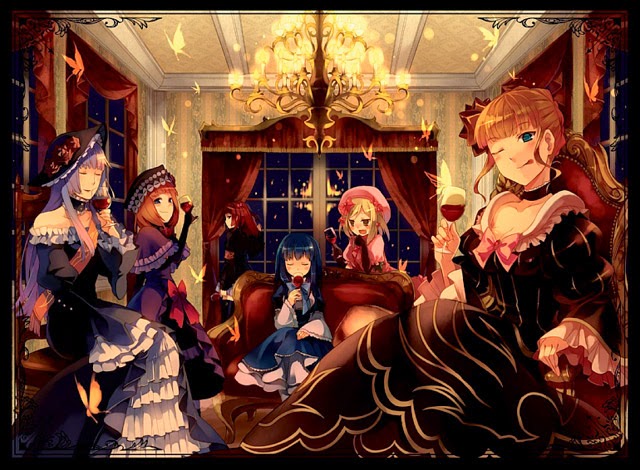 Oh, 2014. You were an interesting year but you have left us for good, never to darken our doors again. Bye now! Don't come back! Actually, 2014 was a very productive year for Nagareboshi Reviews: I managed to post 213 times last year, more than I managed to blog in 2013 - although, considering I was a full-time student in 2013 and an unemployed slacker in 2014 probably accounts for the difference in post count.

It seems appropriate to look back at Nagareboshi Reviews during 2014 and pick my favorite posts of the year! I'll split the list up into two sections: reviews and meta/commentary. Flashback Friday, anyone?