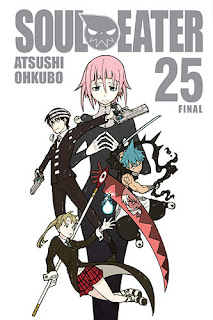 Kid’s sense of order stands in sharp contrast to the unpredictable madness of the Kishin. But order and madness are two sides of the same coin. When Asura challenges the “tyrannical” Shinigami and his laws that serve to control humans’ lives, Kid can feel the tendrils of madness within himself seeking purchase. The bonds of his friendships and his faith in order are tested to their limits as Asura makes his final stand against the forces of DWMA. When the moondust settles, who will emerge as lord of this world–Shinigami or Kishin? (Source: Yen Press)

Spoiler note: Post contains some spoilers for the Soul Eater final volume (although not explicitly).

I don't think that Atsushi Ohkubo knows how to end a series, and that is okay by me. I don't demand much of a series ending but I do ask that they resolve at least the biggest plot lines and create a satisfying end based on the story and the character development up to that point. It doesn't have to be happy go lucky, it doesn't have to be one I necessarily agree with (i.e. "ugh why didn't [x] happen!"). Ohkubo, in the Soul Eater manga finale, tries to wrap up the DWMA vs First Kishin battle royale but he has clearly written himself into a corner so ends things the best way he can. 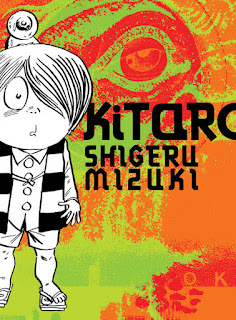 Meet Kitaro. He’s just like any other boy, except for a few small differences: he only has one eye, his hair is an antenna that senses paranormal activity, his geta sandals are jet-powered, and he can blend into his surroundings like a chameleon. Oh, and he’s a three-hundred-and-fifty-year-old yokai (spirit monster). With all the offbeat humor of an Addams Family story, Kitaro is a lighthearted romp in which the bad guys always get what’s coming to them. (Source: D&Q)

Reviewing a yokai book, especially a Shigeru Mizuki book, is a daunting task. Mizuki is considered Japan's resident expert on yokai tales in manga; according to the book's foreward, there's an entire segment of the Japanese population who owes their knowledge of the yokai world to GeGeGe no Kitaro. It makes sense: every chapter is a field study on a different variety of ayakashi as they wreck mischief on the human world.

And at the center of the story is the mysterious boy Kitaro, the human-looking yokai with one eye whose powers with the supernatural are a thing of legend. If something goes wrong, the world calls upon Kitaro for guidance, and he works his magic to the 'ge ge ge' chorus of the beasts all around him. He dutifully serves the realm of humans but his life is fully entrenched in the yokai world, and his ability to slide between these two spheres is a major reason why both sides look up to him.

Spoilers for the first two episodes of Sword Art Online II. All name spellings taken from Wikipedia.
One year after the SAO incident, Kirito is approached by Seijiro Kikuoka from Japan's Ministry of Internal Affairs and Communications Department "VR Division" with a rather peculiar request. That was an investigation on the "Death Gun" incident that occurred in the gun and steel filled VRMMO called Gun Gale Online (GGO)...Failing to turn down Kikuoka's bizarre request, Kirito logs in to GGO even though he is not completely convinced that the virtual world could physically affect the real world. (Source: Crunchyroll)
I know, I stubbornly blogged through the entirety of season one of Sword Art Online when it aired on Toonami. I should have done the same for SAO II, but time got away from me, so that by the time I was actually ready to watch it, over ten episodes had accumulated on my DVR. I am so bad at this, you guys! (I don't even want to think about all of the Kill La Kill episodes I never wrote about. Yikes. Sorry.)
The funny part is that I've been looking forward to watching the second season of SAO, based on online hype and what friends have told me. I've been promised a really great handful of arcs, including Asuna-centric storylines, which is always a plus for me. Unfortunately, two episodes into the Gun Gale Online arc that opens up season two, I haven't seen much to get excited about but I remain hopelessly optimistic.
Read more »
Posted by Sarah at 8:07 PM No comments: 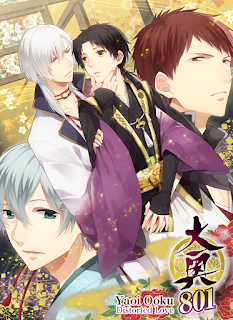 This month will be articles/news only.

Breaking: Everything Is Legend of the Galactic Heroes 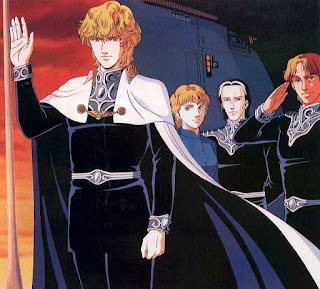 Hold onto your hats and ignore (at least for now) the cursed renaissance of Tokyopop, long may they flounder. Two license acquisitions at this weekend's AX 2015 are going to blow your dang socks off, especially if you're an old school otaku.

First: Viz Media licenses the Legend of the Galactic Heroes novel series, to be published via the Haikasoru imprint. The Haikasoru Twitter says the first three, but I imagine if sales are good enough, they will push out more to meet demand.

This is the Moby Dick of licenses and having both of these announcements is no small miracle (although I'd like to think Viz and Sentai coordinated the affair so they would come out roughly one after the over). I've spent years thinking LOGH would never see the light of my bookshelves, but leave it to two of the top anime companies in America to prove me wrong.

After all, LOGH has a lot of strikes against it for being licensed. It's an older series, a lengthy space opera, and the art style is dated and may not appeal to newer viewers. And yet! We have it! So let us, during this holiday weekend, bask in the glow of victory at acquiring a legendary anime. I really cannot wait to acquire this series; I'll even stomach Sentai's usually high prices to get my hands on it. Hopefully, I find it worth the hype.

(Oh yeah, and Sentai rescued the license for the Higurashi anime, but we'll talk about that later. Give me a reason why not! --- okay, okay, I'll just let myself out now.)