Wednesday Briefs: Woman Made Of Snow

It's been a while, but here's a new bit of writing for Wednesday Briefs. It's an original fiction stand alone, based on something I've been interested in recently and which I will probably get side-eyed at for writing about since I haven't studied it that intensely, and my take on the original story is fractured in places, but enjoy anyway, I guess!

Yuki-omba. The woman of snow wakes with the sun. I kinda fucked around a bit with tengu mythology, but whatevs. Prompt used: yokai.

As the sun rose and created a glaze of sharp, cold light across the ice-covered hills of the countryside, so Yuki-omba rose with the sun and prepared for the day ahead. For the thousandth time, she washed her face in the stream, weaved a new kimono out of the snow for her to wear—as stark white and crisp as the snow bank it was born from—and brushed a flower across her lips until the crushed petals turned them blue.

She climbed over the low-lying hills that covered the countryside, gliding over the crust of ice and frost as if her feet did not touch the ground at all. No arctic wind, no blast of chill could slow her descent through the rolling expanse of trees, all bare limbs and sparkling with frozen ornaments from the previous night.

The humans in the nearby village called her Yuki-onna, whispered her name with a mixture of reverence and fear, but she did not feel like a young woman anymore, not after one thousand years of winter. All she knew, from the moment she first opened her eyes and felt the ground with her hands and fell into the fresh snow with her newly born body, was the forever season of winter. In her head, she was Yuki-omba now—the grandmother of the snow. 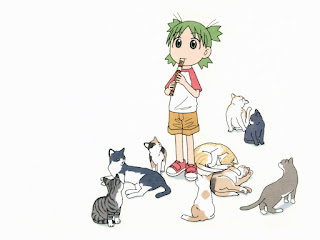 I've had a long, busy week so I'd like to treat y'all with a lighter subject for a blog post, one that's got some nice images in it and is about a manga I've never not laughed at or at least smiled at: Yotsuba&! by Kiyohiko Azuma, a slice-of-life series about a little girl named Yotsuba and her daily activities in her new town, learning how things work, making friends, and following around her single dad who is still navigating fatherhood.

If you haven't started reading Yotsuba&! yet, you are missing out on one of the most charming and aesthetically pleasing series currently being released in English. Yeah, it's that good.