Saiyuki volume 1
Author: Kazuya Minekura
Tokyopop
208 pages
It was a time of chaos, when Heaven and Earth were as one, and humans and demons - the youkai - lived together in peace. The foundations of civilization and religion were raised and reinforced in this land of Togenkyo, the paradise known as Shangri-la. But now, a great evil threatens harmony in this great land. Far to the West, in India, someone is attempting to resurrect the youkai lord Gyumaoh by mixing human science with youkai magic. This forbidden practice has created a Minus Wave of negative energy that is spreading across Shangri-la, poisoning the souls of the youkai and turning them into mindless monsters.
The only hope lies in four legendary heroes: Genjyo Sanzo, a high priest with low morals; Son Goku, the hungry and mischievous Monkey King, just released from 500 years imprisonment; Sha Gojyo, a water sprite with an addiction for good smokes and bad women; Cho Hakkai, the legendary demon slayer, and his transforming dragon Hakuryu. To save Shangri-la, these unlikely companions, united by fate, must travel together ... into the west!
The Chinese folk tale "Journey To The West" has been used as a launching pad for various Japanese manga series in the past, possibly the most notable being Akira Toriyama's Dragon Ball. Minekura's take on the legend of Son Goku and friends is certainly an unorthodox twist, filled with beautiful tragic boys, gun-wielding priests, and animals that turn into vehicles, all anachronistically set against the long-ago era of Asia's history - with demons, of course. It's a rather wonderful series and seeing the main cast's respective history usually makes me emotional, no matter how many times I read it. But the early volumes, and volume one especially, is rather weak story-wise and relies too heavily on cliché subplots and long scenes of exposition to propel itself anywhere worthwhile. By the end of the fifth chapter, the reader is left with more questions than answers and little incentive to read following volumes beyond the fact that the boys are so pretty and so funny in their globe-trotting hijinks.
Read the rest of this retrospective review after the jump!

As the premiere volume of Gensomaden Saiyuki opens, we are given a rather rough and tumble introduction to the four main atypical heroes of the series, in a series of moments meant to familiarize the audience with their particular character traits: Sanzo is the rough gunslinger priest, Goku is the bottomless pit of a stomach goofball, Gojyo is the perverted womanizer and alcoholic, and Hakkai is the calming presence that hides a much sharper heart. In short, all the various personalities needed to make conflict within a group while still make it entertaining time after time. We are also given a short summary on the dilemma facing our team of heroes, concerning the Minus Wave, and without further delay they are sent out on their way on the long road to India. Spoiler: they do not reach India by volume eight. Hell, as far as I know, they don't even reach India by the end of Reload. I think Minekura enjoys the journey too much to get them to the church - err, temple on time.
The story itself begins to meander the moment they set foot on their quest into the West, delving into episodic tales meant to reveal the nature of human/youkai relations in their country. The message of "youkai are people too!" is in every chapter, and during their first stay at an inn with a girl who hates youkai this message is dropped on readers' head with the subtly of a five hundred ton weight. Naturally, this girl represents the people made to fear and hate youkai due to the debilitating effects of the Minus Wave - but never fear, because Sanzo and his gang are the 'good' kind of youkai and will teach her to stop hating and perhaps even understand those poor demon people! Gag me with one of Goku's staffs, please. We are also introduced to a spider woman with giant nipples. Yep. Not one of Minekura’s best minor villains, to be honest. Kougaiji and his gang are seen on the periphery of the action, plotting and saying vagaries about someone’s mother, but they have yet to actually enter the fray. 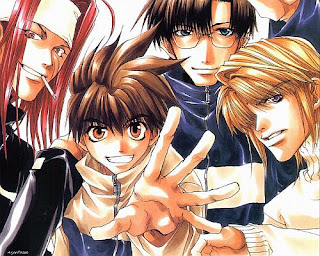 Probably the most interesting section of this volume is when they take refuge at a temple that recognizes Sanzo by his sutra and gives them all safe haven – that is, until youkai attack them and start killing priests like flies. It is our first glimpse into Sanzo’s life before the start of Saiyuki – a start of series of glimpses that don’t get properly expanded upon until Saiyuki Gaiden, yet another Minekura manga that will probably not see the light of North American release in this decade. I could have done with less of the horrifically innocent monk who is aghast – aghast I say! – that any priest in that age would gamble or drink or kill. But then again, this is Saiyuki, where the after-school lesson of the day doesn’t get any less trite until they’re dropped all together – and that doesn’t happen in this volume at all.
The art, by the way, is terrible. Her architecture work and backgrounds are pretty good, but character faces look askew – too askew to be an artistic quirk – and a lot of the ‘emotional’ scenes fall flat due to bad rendering. Not to mention the hypnotic horror of the spider woman’s nipples; were those even necessary? This is a shame, as the cover art is beautiful, and I know for a fact her artwork gets better as the series progresses, to the point that Reload looks like it was done by a different artist all together.
Really, the one thing that carries this volume across the finish line is the cast. Everyone has their favorite main guy, whether it is Sanzo or Goku or Hakkai or Gojyo. Mine has been Hakkai but I’ve recently switched fan allegiances to Sanzo (I do love me a stubborn blond who carries a sutra and a loaded pistol like a boss, ayup). Their daily squabbles and boisterous back-and-forth during gunfights is the thing that keeps the pages moving and the readers reading, because it sure isn’t the so far lackluster plotting. Plus, there are enough fragments of insight into each main character’s back story that it draws the more curious fan back to see more of what they were before the main story started (unless you like Sanzo, in which case you might be better off reading Gaiden for those kinds of tasty tidbits).
Overall, Saiyuki has all the markings of a decent, even great series, but it’s hampered down by first volume woes – slow plotting, shoddy villains, and subplots that make a Hallmark movie look like Gunslinger Girl by comparison. But it’s all about the boys, and it will be the boys that will make people read the rest of this series. It does get better, but first it has to get really bad, and it’s getting through the really bad stuff that might deter most fans from reaching the series finale.
Note: Since Tokyopop has gone under, certain volumes of Saiyuki and Saiyuki Reload may be OOP (out of print). Make sure to check your local book shops and libraries for them; my library thankfully bought all of Saiyuki and Reload when they came out.
Posted by Sarah at 11:33 AM