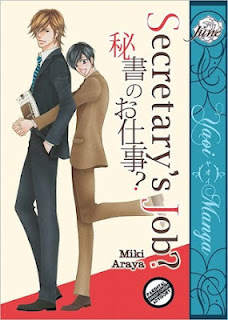 Secretary's Job?
Author: Miki Araya
June/Digital Manga Publishing
200 pages
Takase is a legendary secretary. He'll do anything to make your day easier and efficient. Some say he's a miracle worker. As per the President's request, Takase has been assigned to his lazy son, Honjo, to become Toshiaki Honjo's secretary. As always, Takase is doing his best to support him, but Honjo makes a move and kisses him at work What does this mean? Sounds like business is getting mixed up with pleasure. (Source: Goodreads)
If the name Miki Araya sounds familiar, it should; I reviewed a title by her earlier this year called I'll Be Your Slave, an oddly delightful book about Moriya and his favorite model who he ends up falling in love with. On the heels of that we have Secretary's Job?/秘書のお仕仕事?, based around secretaries and the stubborn men they work for that end up - wait for it - falling in love with their assistants. Opinion for this one doesn't seem to be as divided which is good, because Secretary's Job? is a surprising gem of a one-shot that will please any fan of BL office romance/humor.


Both couples in this book are between a worker and his newly appointed secretary, so it's like boss/co-worker romance if you want to look at it that way. However, the position difference isn't as pronounced in such a relationship, so if power imbalances squick you, this shouldn't be so bad. Honestly, they all seem more like co-workers than anything else - and the actual boss of this company is a huge goofball who thinks wearing a prosthetic nose and pretending to speak bad Japanese will fool his son into thinking he's a foreign visitor. Yup, it's that kind of manga.
But this is something Miki Araya does very well, mixing the drama with a healthy dollop of humor and lightheartedness. This is especially true in the relationship between Takase and Honjo; Takase's infectious energy and sparkly eyes end up driving Honjo to work harder, and his dramatic crying spells pretty much guilt Honjo into going that much further to be a great employee and future company president. Meanwhile, Monma - another sort of 'legendary secretary' like Takase - ends up beguiling poor Setoguchi with his happy-go-lucky attitude and unkillable smile.
As for the story itself, it's entertaining and refreshing enough without being horribly deep. The Takase/Honjo chapters follow a set pattern of working together, then falling in love, then being split apart by their feelings (as most workplace-set manga romances tend to go in this direction). Their relationship is one I can't help but cheering for, as Takase is so cute and Honjo is so oddly endearing as he unconsciously pushes himself to make Takase happy - before realizing it's for a deeper reason that being a great leader. Even their co-workers end up applauding them during their more melodramatic moments.
On the other side is Monma, who has been put into a bet to bed Setoguchi before too long but ends up falling for the eternal optimist of a secretary. If Takase/Honjo was a happy accident, Monma/Setoguchi was a total twist of fate no one could have seen coming - least of all Monma, who finds himself genuinely falling for the one man in the office he hasn't slept with. And let's be real - if your heart didn't go doki-doki when Monma brushed Setoguchi's hair with his hand, I can't even begin with you. I liked his lady friend Takada; she seemed like a very interesting person and her friendship with Monma was nice to see in a BL manga.
The only story that wasn't an office romance was the unrelated one-shot "Falling In Love With You", involving the two hottest guys on campus, one of which decides to investigate the other one intently in order to destroy his reputation and become the single most attractive guy at school. Naturally, the more time they spend together, the more they become attracted to each other. See a pattern yet? Having said that, their courtship is pretty adorable and funny to read, and it has a nice touch of drama during the middle of it so it's not all fluff and cupcakes.
Honestly, if you enjoy some workplace-set romantic comedies with a slightly dramatic slant, you can't go wrong with Secretary's Job. The art is easy on the eyes, the characters are vibrant and interesting, and Araya's sense of humor never falls flat. I can only hope that DMP brings out more of Miki Araya's works into English, if they keep being so darn entertaining.
For more information on DMP titles, releases, and the latest news, visit the Digital Manga Inc.'s website: http://www.digitalmanga.com/
Posted by Sarah at 8:50 PM