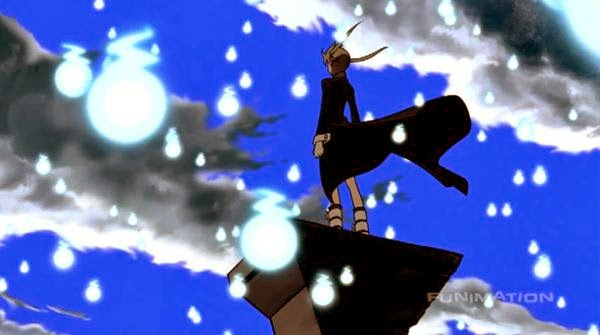 Spoiler warning: So many spoilers in this post. Be careful if you haven't watched all 51 episodes yet!

Having just finished the last two episodes of Soul Eater, I am sorry to say that the ending of this BONES anime does not do the manga justice. It doesn't do anyone justice. It just stinks. Even if you don't read the original source material, the writing behind the anime's finale is laughably bad.
There is no logic to be found in the big bad battle between DWMA and Asura. This anime likes to set up shiny ideas and then let them drop without realization. The end battle, between Asura and Maka, is ridiculous and contrived. If any shonen anime needed the FMA: Brotherhood treatment, it's Soul Eater.


Remember the soul wavelength training between Maka, Soul, and Black Star? Nope. It is not even attempted against Asura, even though they are in the same place together during the final battle. Apparently, only Mosquito gets to see this in action, and he's barely the same power level as Asura.
Black Star's training to use Tsubaki's special form? Pfft. Black Star uses Tsubaki all right, but Tsubaki never shifts into her Uncanny Sword Mode, which is rumored to be incredibly powerful on a mythical level. Gosh, sounds like the perfect weapon against the First bloody Kishin! Nope! Doesn't even register as an idea!
Well, what about Genie Hunter? It is brought up, but ultimately is not even a factor in the defeat of Asura. This was supposed to be Maka's special super awesome move. Using it would have strengthened the bond between meister and weapon. But no, she doesn't even get to finish Asura off with it.
The one useful and actual Chekov's gun - Death the Kid's twin cannon fire - goes off only to literally misfire. It doesn't kill Asura, much to Death's consternation. It only serves to reveal his true form, which is terribly bishonen in flavor and ends up acting rather twitchy and nervous in the face of Maka's fist.
Oh, did I mention Maka literally punches out Asura with the power of friendship and bravery?
Meanwhile, every other character is left to watch on the sidelines, including Chrona and Stein, who have seemingly gotten over their various psychoses long enough to give the appropriate pithy comments. Lord Death somehow manages to come back from near demise, looking shoddy as hell, which obliverates any idea that the anime was setting up Death the Kid as the new Lord (which would make sense, as the last crack in Lord Death's mask only appears after Kid summons his twin cannons at 200% soul wavelength synchronicity).
And did the gathering of Asura's weapons serve in his demise? Of course not. Did anything substantial come out of the deaths of Medusa and Arachne, the series' only functional female antagonists? Again, no. The future of DWMA is dropped in the hands of children, because the adults are too busy being useless to lend a hand.
Everything ends when Maka realizes her inner strength is not her weapon or her fighting ability but her bravery. It's her refusal to be afraid, to let fear overtake her. And that would be a nice thing to reveal except it completely discounts all her training and natural talent at being a meister, and shows that Maka is the only person in DWMA who isn't sent to shaking in their boots at the sights of Asura - which, really? That seems highly unlikely, as much as I adore Maka.
Honestly? I wish Maka had just Genie Hunter'd ol' Asura into deli slices and sent him scattered into the wind forever. Maka and Death the Kid and Black Star should have actually worked together to take Asura down. Death the Kid could have become the next Lord Death - it's not like at that point they were following the manga anyway! Hell, someone could have wielded Excalibur and cut off Asura's head at that rate!
(We do not speak about the ridiculousness that was Maka becoming a weapon. We just don't.)
The best part of these last two episodes was Maka going inside Soul's inner self and rescuing him from his own darkness, and then Soul accepting the darkness as a part of him, albiet a now diminished one. It was good and it solidified the friendship between Maka and Soul in a way that a hundred death-defying shonen battles could not. It was also the only bright spot in a sea of mediocrity.
So, again. Sorry, Soul Eater. A good 80 percent of you is pretty good! The other 20 percent - ironically, the part of you that separates completely from the original manga - just sucks.
Perhaps another studio will have mercy on you and remake you starting from the Baba Yaga arc, actually follow the manga's plot line, ditch your lazily written plot twists and end you properly. But considering that is about as likely as Excalibur finding a wielder, I suppose you'll stay a hot regrettable mess.

Edit: An earlier version of this post misidentified the antagonist of the series as Eibon, when it should be Asura. The post has been corrected to reflect this fact.
Posted by Sarah at 4:20 PM