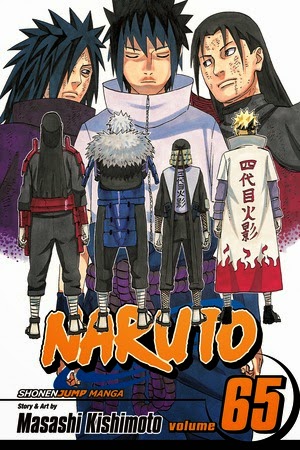 Naruto volume 65
Author: Masashi Kishimoto
Viz Manga/Shonen Jump
189 pages
Hashirama and Madara: As the battle against Obito and Madara continues to heat up, Sasuke has Orochimaru revive the previous four Hokage! In order to learn the truth, Sasuke will listen to First Hokage Hashirama's tale of how the village was founded. But what will Sasuke's next move be once he gets what he wants?! (Source: Viz Manga)
Spoiler warning: Review will contain some spoilers of events in volume 65 as well as recent volumes leading up to this one.
Recently, every time I open up a new volume of Naruto, I'm worried that it will return to the slump it was in about five books ago. Thankfully, this latest book is not in any slump at all. In the sixty-fifth volume of Naruto, Kishimoto returns to what he does best, integrating the past and the present through flashbacks, and showing how in the world of shonen, he is really underappreciated as a talented storyteller. You think Naruto and think fights, right? This book has fighting, yes, but it has a heart that can be seen through its characters that battles just can't convey.


This volume has zero panels featuring Naruto Uzumaki, resident orange-clad loud ninja. Funny thing is, that only occurred to be after I had finished the book. No, the star of this volume is Sasuke Uchiha, who is taking a trip to the past through the words of the Hokage themselves. As he struggles to understand where the Uchiha clan has been and from what circumstances rose Konohagakure, what follows will ultimately shape the path of Sasuke's continuing journey.
This is an immensely historical volume that spans so many years as it retells the founding of Naruto and Sasuke's home village and why the Uchiha clan was eliminated. Not only do we see the original era of warring states but we also hear why Sasuke's beloved older brother, Itachi, was chosen to destroy his own family. And, as we all know, Sasuke's softest spot in his heart is Itachi - which is rather ironic, as Sasuke is the one who ultimately killed Itachi.
Some of my favorite parts of this book, outside of the flashback sequences which were just ace all around, are when the original Hokage, now revived by Orochimaru's jutsu, interact with each other. There's a lot of honest exchanges and good-hearted ribbing and sass all around from the past leaders, as well as people meeting each other for the first time.
Seeing Hashirama and Minato, the First and Fourth Hokage, talk to each other was amazing on so many levels. It's the kind of scene that only comes around so often because in order to make it happen plausibly, you have to go full necromancer which is something not a lot of ninja can do. Plus, seeing Minato again is great at any time.
Otherwise, this is Sasuke's volume, through and through. If your favorite character is a particularly dour-faced Uchiha boy, then this book will become a favorite of the whole series. For Sasuke, this book is a turning point in his life. He is finally given all the facts and holds all the data on the Uchiha clan and their history, and can move forward without doubt. He may be in the company of Orochimaru and the members of the now defunct Hebi group, but Sasuke is going to follow his own path from now on. And there's no doubt in my mind that it will take him to Naruto's side yet again.
It is the final battle for this series, and Kishimoto is quietly gathering all the relevant forces together for the big showdown. Now that the Sasuke and the Naruto dual narratives are finally running into each other again, we can get back to business proper: saving the world of ninja and bringing peace back to these newly warring states. How Konohagakure will look like after the dust settles is up to how Sasuke and Naruto handle the threat of Madara's army.