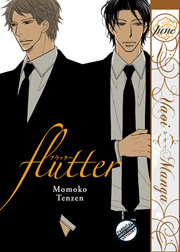 Flutter
Author: Momoko Tenzen
Digital Manga Publishing
200 pages
Asada is hypnotized by a handsome co-worker he sees on the street nearly every day. So when the two men are paired up for a high-pressure project, he can’t believe his good luck! But what will happen when Asada’s defenses are shaken by their immediate, undeniable connection? Flutter beats with the racing pulses of brand-new lovers! When success at work leads to an after-hours confession, an exciting relationship sparks to life. But is the flash of intimacy the beginning of a fiery blaze…or just a passing flicker? (Source: DMP)
I adore workplace BL manga. It's just one of those sub-genres that ends up being an insta-read for me when I see it. Now, they are not all great - but if they wrote half as good as Momoko Tenzen, they would be. I'm a great fan of her title The Paradise On The Hill and I'm incredibly pleased to see that Flutter is equally great. Her handle on co-worker relationships and romantic dynamics is something for fans of atypical BL to truly love.

Flutter is a story of two men who are brought together by chance and fall in love with each other, slowly, painfully. They are both complex, vulnerable people but they find a sort of completion in each other. Their relationship unfolds beautifully from co-workers to friends to lovers, and it is incredibly organic and true.
Naturally, like all good love stories, there's a twist, in the form of Mizuki's past lover. This man has clearly broken Mizuki's heart, leaving behind someone closed off to romance and to other people's hearts. No one is more surprised that Mizuki when Asada unknowingly slides into the cracks in his armor - except for maybe Asada, who didn't expect to fall in love with this beautiful man who is making his heart beat so fast.
Personally, I found the character of the Professor an intriguing and interesting one. He could have easily been an antagonistic figure, but he wasn't - he was simply himself, another person caught in the web of relationships that defines Flutter. That's one of the pluses of Tenzen's writing; there are no heroes or villains, just humans trying to figure out their lives, complicated by infatuation.
Another plus is how Tenzen handles the relationship of Mizuki and Asada. She dodges a potential issue by making Mizuki openly gay, but the two men must still contend with being co-workers as well as being gay in a society that still hasn't accepted homosexuality completely. These add up to more layers that make their interactions even more complex; there's one scene in which Mizuki pretty much tells Asada that if they want to meet up at a bar after a company party, they'll have to arrive at different times. Why? Because the risk of even appearing to be together is too much.
My favorite part of Flutter - outside of the writing, naturally - is the art. It is stunning stuff. I love the way Momoko Tenzen draws her men, especially men in suits. She has a great grasp on what makes scenes dramatic or emotional without going overboard. I also like that she gives detail to the secondary characters, even the women, something that can be somewhat neglected in BL manga. Tenzen's usage of blank space to emphasize a certain scene or panel is another brilliant touch.
I adored Flutter; I could not bear to put it down while I was reading it. It's a story of a bittersweet workplace romance that doesn't bend to typical uke/seme dynamics and features two very well-rounded men in love. There's a bunch of Tenzen's work available in English and this is a great title to start with.
For more information on DMP titles, releases, and the latest news, visit the Digital Manga Inc.'s website: http://www.digitalmanga.com/
Posted by Sarah at 5:03 PM