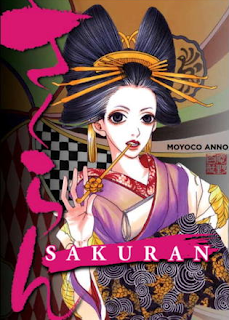 
In Sakuran, Moyoco Anno lifts the veil on life in the Edo period pleasure quarter, Yoshiwara. The story follows Kiyoha, sold into a brothel as a child and forced to work as a maid and her rise to prominence as one of the top-ranking courtesans in Yoshiwara. The allure of the “flower and willow world“ as it was called by artists in the day is underscored by the very real tragedy, heartbreak and difficult lives led by those seemingly glamorous courtesans. Will Kiyoha’s fox-like wiles give her a chance to break free of her gilded cage? Or will her fighting spirit ruin her chances of ever escaping the brothel? (Source: Vertical Inc.)
Content warning: The manga Sakuran is centered around Edo-era sex workers. It contains graphic descriptions of life in the pleasure quarter, including scenes of sex and violence. Recommended for readers in the M/18+ age range of manga.
I have this faint memory of reading the first volume of Flowers & Bees by Moyoco Anno a couple of years ago. It did not make much of an impression, not because it was bad but probably because I only had the one volume and I tend to forget about a series if I don't read more of it. Sakuran therefore became my official introduction to the work of Moyoco Anno and it has me asking: where are the rest of her work in English? Because this woman, clearly, has skills in art and storytelling and deserves to be widely read. No wonder she's the focus of the latest Manga Moveable Feast.

The story of Sakuran isn't one commonly told in manga. Our main protagonist is Kiyoha, a prostitute in Edo-era Japan who is forced to make a living through selling her body. She is incredibly headstrong and stubborn but she is also contained many vulnerabilities, things she keeps hidden behind the mask of an oiran (a high-ranking courtesan). Kiyoha's strength has been built through her childhood of painful memories; it is no wonder that she presents herself as a bitch and someone to be hated. It is better to be a bitch than someone who can be taken advantage of.
Fiction has a bad habit of romanticizing the past, of making history seem softer and easier than it was. Sakuran rips away such notions. The life of a courtesan is hard and filled with suffering. You are not allowed love or actual self-gratification. You are a beautiful bird in a gilded cage, forced to sing for your supper every night - your song being your body, given to men who will never love you. In this case, Sakuran is a tragedy of a historical drama; none of the main players can find happiness and must learn to make their own way in a world that values their bodies over their souls.
What makes Kiyoha such a compelling character is how unapologetic she is. She has grown up in the pleasure quarters since dragged in as a small child; she has become part of the system but she also fights it on a regular basis. I love how Moyoco Anno introduces us to her, sets her up as someone entirely unlikable - and then goes through her entire back story to show us how Kiyoha got to where she is now, the events that shaped her and made her. No one understands what it is like to be a courtesan more than Kiyoha does. She becomes oiran because life as one seems easier and she stays as an oiran because she has no life beyond the walls of Yoshiwara.
I know some readers have found issue with Moyoco Anno's art style. I can see why it's off putting; it's very stylized and can seem wonky at times. Personally, I found it striking and eye-catching. Unique doesn't give it justice. I especially love the way Anno draws facial expressions; just look at the various things Kiyoha can convey in a smile for proof. Anno's style comes out best in scenes of peril, when Kiyoha is at her lowest. The bigger the panel, the bigger the emotional punch.
There is also the issue of sex in Sakuran. It's not to be avoided; the story is about sex workers on the job, scenes involving sexual intercourse is bound to happen. If such scenes make you uncomfortable, I would not read Sakuran. At the very least, there is nothing romantic about these scenes. The only time sex is seen as romantic is when she is in bed with the florist, one of the few visitors of Kiyoha we actually get a feel for character-wise.
Of course, let my review not fool you. The courtesan quarters of Yoshiwara are inhabited by many characters, all complex and interesting to read about. Kiyoha often clashes with many of them on a daily basis, and it is through these clashes that we seen the various personalities that inhabit the quarters. There is a complex hierarchy within Yoshiwara and in this hierarchy, everyone has a part to play, whether they like it or not. This world slowly unfolds before our eyes as we follow Kiyoha's path from the lowest of maids to the highest of the oiran order, and we see the many layers of ceremony and order than are in a courtesan's daily life. Even the way one puts up their hair is a sign, a marker of what title they have in this hierarchy.
Sakuran is a beautiful heartbreaking manga. It is open in its depiction of life in Yoshiwara and the character of Kiyoha is someone readers will both despise and admire, often at the same time. That's good; polarizing figures are often the most interesting to read about. Add to that Anno's matchless artistic style and it's clear we have yet another fantastic release from the people at Vertical Inc. They have given Sakuran a beautiful paperback release, complete with shiny colored cover and oh-so-useful translation notes on the phrases specific to courtesan life. This was my first introduction to the world of Moyoco Anno; it can be yours, too.
You can purchase your own copy at the Vertical Inc. website or at your local comic book store. Be sure to follow other entries in the Moyoco Anno Manga Moveable Feast on Twitter with the hashtag #AnnoMMF; the festival ends tonight!
Posted by Sarah at 10:52 AM