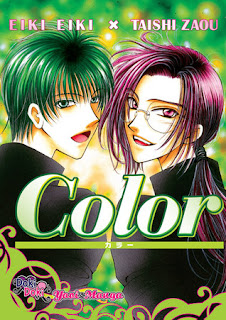 Color
Authors: Eiki Eiki, Taishi Zaou
Digital Manga Publishing (Doki Doki Imprint)
200 pages
Theirs was a miraculous and fateful first encounter! In a trance, Takashiro Tsuda gazed at the artwork that shared the same title as the work he had created. The title "Color," and the artist: Sakae Fujiwara. This coincidence was the driving force that led the men to inevitably meet, but what bond, if any, will the artists share? (Source: Goodreads)
Ah, Eiki Eiki and Taishi Zaou: two great tastes that go good together.
English language manga readers know Eiki Eiki as the manga-ka behind Dear Myself and Princess Princess (also an anime) while Taishi Zaou is known as the manga-ka behind Green Light and The Day of Revolution. When they come together in one work, we get Color, a tour de force of romance, humor, and drama packed into one volume. Do me a favor and get it now.


Okay, that's probably not enough reason for most to pick up a manga. Let me explain why Color hits all the right notes. It's about two young men drawn to each other by fate - or hitsuzen, if you prefer, XXXHOLiC fans - and falling into a deep friendship that blooms into an even deeper love. It's about digging within oneself to realize what one's true dreams and aspirations are and finding that person that completes the color palette inside you. It's about humans being human and making mistakes and pushing and pulling against each other to find their happy ending.
It's also incredibly cute. I love Sakae and Takashiro together and I love that their classmates ultimately support their relationship, which probably puts Color into that genre of yaoi fiction where everyone is cool with the LGBT community and don't have an issue with queer folks. Plus, Takashiro Tsuda is totally adorable. Long hair and glasses and trendy coat and scarf combos for the win!
Not only is Color cute, it brings the drama. Both Takashiro and Sakae have their issues and it takes them a while to realize they don't have to tackle them alone, but I found that incredibly realistic. Plus, they also have a realistic take on their own relationship: they don't automatically assume they will stay together forever, but they know they'll cherish the love they have for what time they do have. I'm also glad that Eiki and Zaou didn't gloss over the issue that gay men in Japan aren't exactly swimming in civil rights i.e. same-sex marriage.
Plus, there's totally awkward first time sexy times and it's great! No one is an expert, there are lots of weird questions being asked, and best of all there's no question on consent - it's clear that both men want to have sex and respect the other person's desires to do so. Can we send this enthusiastic consent story to other yaoi manga-ka, pretty please? Also, there's a really funny joke that skewers the seme/uke dynamics, and I'm always here for a manga that makes fun of yaoi's near religious reverence for keeping couples in top and bottom roles.
I really really enjoyed reading Color. I'm so glad I picked this volume up on a whim when I saw it at the store; it was totally worth the price of admission. When two of my favorite manga-ka come together in one work, the end result is fantastic. I'd recommend Color to any fan of yaoi manga who don't feel like committing to a whole series but still want to be fully entertained.
For more information on DMP titles, releases, and the latest news, visit the Digital Manga Inc.'s website: http://www.digitalmanga.com/
Posted by Sarah at 11:58 AM