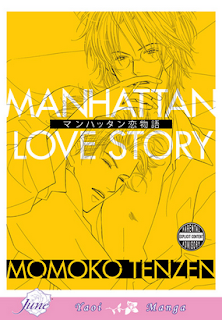 
Diamond leads a pretty typical life in Manhattan - New York's city of love. He is an attractive florist, and has an equally good-looking lover, Locke, who is the influential head of a large Manhattan corporation. Unfortunately, Locke is constantly consumed by his work, but his love for Diamond remains an undying flame. Can this love stand the test of an over-zealous, workaholic boyfriend? (Source: Goodreads)
I always get nervous when a manga-ka tackles an iconic American city as the basis of their book. Not that I don't trust them to get the vibe and energy of the place but damn do their American names get ridiculous. And let's be real - names like Lock and Diamond are ridiculous.
But I can forgive Momoko Tenzen for thumbing through a Japanese to English dictionary for main character names because they are just so darn adorable. There is drama, yes, but it is heavily tempered by the power of cute.


As usual, Tenzen is superb at bringing couples together. There are multiple couples in this volume but the main one is Diamond and Lock, and for me they are the most interesting. A florist and his CEO boss? Yes please. I am one hundred percent here for that power dynamic, and Tenzen manages to wrangle in all the awkwardness of it without making it uneven (although Diamond does have an upper hand in arranging dates, considering his pay level).
Still, they are pretty adorable together even when they're figuring out their lives. I also liked that one of them - mild spoiler alert! - is revealed to have had a past relationship and still has, um, remainders from said relationship. It's been a while since I read a yaoi manga that not only acknowledged that people have past relationships but that sexuality is a fluid, ever changing thing and our position on the Kinsey scale isn't a constant immobile thing. Also, I bet that he's an absolutely adorable father figure.
The only chapter I did not like involved Mister Austin and Raphael, the cherub-faced nephew of Japanese exchange student Kenji, who is dating Lock's co-worker (phew, that's a tangled web to unweave!). It is shota. There is no way around it. And you cannot look me in the eye and tell me either Raphael or the kid Austin is banging are legal age; they barely look old enough for middle school! Luckily, it only lasts for one chapter; the other couples - who are legal age - get far more page coverage in this book.
That chapter above is really the only dark spot in Manhattan Love Story. The rest of the volume carries Momoko Tenzen's usual mixture of romantic drama and rom-com humor with enough sex to make the ink sizzle off the page. I would not say it is her best work so far, but it's pretty darn good otherwise. I could have done without the shota and some of the more contrived plot twists for drama's sake. Recommended - with one age-related caveat - for any yaoi manga fan.
For more information on DMP titles, releases, and the latest news, visit the Digital Manga Inc.'s website: http://www.digitalmanga.com/
Posted by Sarah at 1:04 PM