Manga Review: My Only King 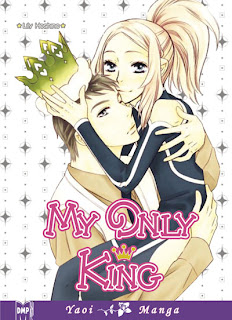 My Only King
Lily Hoshino
Digital Manga Publishing
164 pages
In the land of magic, a new king is being crowned. However, a mishap during the ceremonial rite causes the royal crest to be accidentally attached to a normal human, Kazuomi. To protect the crest from any villains who may be after it, Mewt - the cute and brave sorcerer - is dispatched to the human world. There, Mewt must live disguised as a girl, and as "she" and Kazuomi live under one roof together, the two begin to find themselves attracted to each other... (Source: Goodreads)
First things first: this is very much a Lily Hoshino book. That means cute hijinks, misunderstandings, love at first sight, and one person in the main couple being one of her trademark very feminine guys that often get mistaken for girls by unobservant readers. Only this one has magic! Yay, magic! My Only King is a fun yaoi title with a fantasy twist.


So, in this Lily Hoshino manga, we've got a lot of classic manga tropes working at once - destiny falling on the head of an unsuspecting person, a boy who is forced to dress as a girl because reasons, accidental love at first sight, sudden transfer students, and the power of destiny bringing two people together. In this case, destiny - and the crest of the kingdom - has brought together hapless teenager Kazuomi and magic user Mewt together in order to protect the royal crest that marks the new king. But Hoshino makes it work and she makes it incredibly cute without being cloying.
Yes, Mewt is very feminine. But that is Lily Hoshino's art style - and if you want to read any of Hoshino's (fantastic) work, it is something you have to get used to. Besides, I actually like it? Mewt is such a cute kid! Plus, he's wearing a really great outfit, another strength of Hoshino's style; her characters' clothing are unique and stylish. Mewt just screams to be cosplayed.
The school drama threatens to take over the main narrative, but I think Hoshino was able to reign it in at the end. It was a good setting for Mewt and Kazuomi to discover their true relationship, and added to the hilarity of it. Sir Kazuomi! It also led to some necessary drama that brought the two boys closer together. I wish there had been an extra chapter to give Mewt and Kazuomi some proper closure; it would have been interesting to see Kazuomi actually visit the kingdom where his crest comes from.
My Only King comes with a handful of extra short stories, including The Ghost In The Bath, an oddly sweet story about a man and the spirit that haunts his bathtub, and The King and Rune, which is my favorite non-Mewt story of the book. In King and Rune, we meet the ninth king, who "sells children for profit", and the young man Rune, who keeps being sold only to be returned to the King Nobem every time. For such a short story, it is complex and emotional and I ended up loving it far more than I thought I would.
I've always been a fan of Lily Hoshino since I first read Alone In My King's Harem, so I'm very glad DMP has kept publishing her titles in English. My Only King is a worthwhile addition to any fujoshi's library, if they can look past Hoshino's atypical art style and embrace the bouncy sparkly love that lies in the pages.
For more information on DMP titles, releases, and the latest news, visit the Digital Manga Inc.'s website: http://www.digitalmanga.com/
Posted by Sarah at 1:54 PM