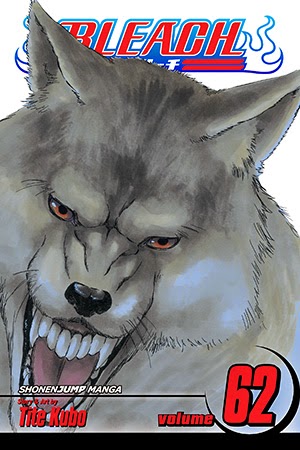 Bleach volume 62
Author: Kubo Tite
Viz Media/Shonen Jump
200 pages
Heart of Wolf: Unable to use their Bankai special abilities, the Soul Reaper captains are at a severe disadvantage against the invading Quincy army. Urahara has a plan to turn the tide of battle, but will it be enough as the Quincies continue their onslaught?!
I found the previous volume of Bleach a bit mediocre and middling, so volume 62 either caught me in a good mood or is a genuine step up in quality. It's not the best volume in the Quincy War arc so far, but it does something the manga hasn't managed to do in a while - they make the newly introduced antagonists interesting. There are a few narrative missteps in this volume, but between the science antics of Seireitei's finest, Kurosaki's return to the main stage, and Hitsugaya rocking the zanpaktou, there's enough to forgive Bleach for its recent faults.
In book 62 of Bleach, Ichigo Kurosaki has finished his training and is all ready to return to Soul Society. Good news for his shinigami colleagues, as the Quincy army is quickly making mincemeat of their captains and vice captains. That is, until the combined brainpower of Urahara and Kurotsuchi fix the biggest problem facing our shinigami army: their lack of ban kai. Or have they?


It's nice to see Ichigo is returning to Soul Society, in a cool new outfit and with a brand new feeling of self, although he isn't a part of the action yet. That honor is split between Hitsugaya and Komamura, whose respective duels with the Vandenreich's top soldiers dominate the main story of volume 62. They contrast each other in style; Hitsugaya is cool and controlled, while Komamura becomes brutal and animalistic as he taps into his greatest abilities, abilities that took sacrifices to reach and even more to take into the battlefield. It's one of the more memorable parallels Kubo makes in the past ten volumes.
For once, I actually found the powers and personalities of the Quincy fighters interesting. It helps that Kubo is no longer trying to make them personable; at this point in the series, that is no longer a feasible option without sidelining the entire arc. In this book, they stay true to their character roots: super-powered weirdos who think they can take down Seireitei and stay ruthless doing so. Luckily, their hubris often leads to their downfall, as many shinigami/Quincy duels end with the shinigami taking advantage of their pride and whooping them thoroughly.
There's an interesting quirk about the Quincy's powers that is revealed in this episode and the measures the shinigami go through to take advantage of it are nothing to sneeze at. I'm staying vague because these measures are a big spoiler, but I hope the series doesn't forget it too soon. I know it's the final arc of the series according to Kubo but I don't see this particular plot twist fading out without aftershocks.
The action in this volume is good, and there is some particular good artwork to go alongside the fight scenes. Kubo has a perfect handle on dramatic imagery and lighting as well as panels that flow and look good, and it shows in book 62 as it hasn't shown in the most recent previous installments. Also, it's obvious that Kubo has been itching to put Kurosaki in some new threads for a while. Now Kurosaki gets to ride into Soul Society looking like the stylish hipster punk hero he truly is.
The volume ends with a duo of Quincy facing off against some lower chair level shinigami that I don't think we've met before, or if we have they weren't terrible memorable until now. It warms the cockles of my heart to see shinigami that aren't captains or vice captains or one of Kurosaki's gang getting into the fight. It's almost like Soul Society is populated by a variety of shinigami with skills and abilities worth showcasing! Gosh, Kubo, thanks!
Bleach 63 comes out in English in February 2015. If Viz did another quick catch-up publishing spree with Bleach, especially since the Japanese is up to volume 66, I would really like that.
Posted by Sarah at 8:41 PM