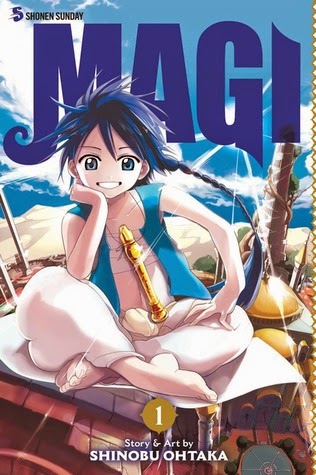 Deep within the deserts lie the mysterious Dungeons, vast stores of riches there for the taking by anyone lucky enough to find them and brave enough to venture into the depths from where few have ever returned. Plucky young adventurer Aladdin means to find the Dungeons and their riches, but Aladdin may be just as mysterious as the treasures he seeks. Together with the djinn Ugo and his friend Alibaba, Aladdin sets out to find his fortune in the depths of the endless dunes... (Source: Viz Manga)
Spoiler alert: Post contains spoiler for the first seven chapters/book one of Magi by Shinobu Ohtaka.
I have to admit, I didn't love the first book of Magi, but I want to read more. Is that strange? I gave the book two stars on Goodreads, and I don't give books in a series a second chance with a low rating like that. But I've been told Magi has promise, that Magi has character development and gets better with each volume. Honestly? With the way it starts, it better. Or I'll be done with it by book two.
I have a bias for shonen manga by female manga-ka, since shonen is such a male dominated demographic. Manga-ka like Arawaka Hiroku and Toboso Yana are terrific at what they do. But I can't love Shinobu Ohtaka's Magi with the same fervor I love Full Metal Alchemist and Black Butler. Those two titles had amazing stories, heartbreaking plot twists, and characters someone could really care about. At the end of Magi's first volume, I couldn't find much of the same elements and I was left wondering what the point would be. Endless dungeon grinding for treasure? I'd rather watch my mom play Diablo II.


One of the more interesting elements of Magi is the setting. It's one of the few manga I've ever seen that is set in a Middle Eastern-like world, naturally with a magical bend to it, with characters named Aladdin and Alibaba and Jamil. There is a multi-faceted culture that is hinted at in several chapters, but the main elements seem to revolve around slavery and sex work and dungeons. These seem like some heavy themes to put into a manga that ran in Weekly Shonen Sunday, but Magi's take on them is pretty basic 101 stuff and involves Aladdin going “That's a mean thing to do!” as he haplessly breaks a slave girls' chains and buries his face into an exotic dancer's boobs. 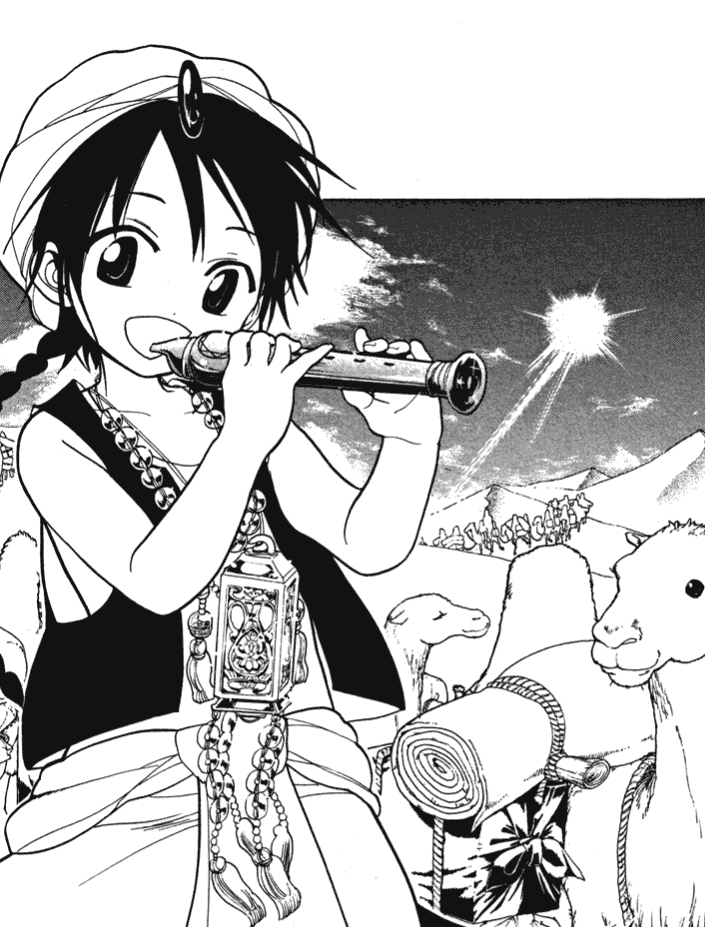 Oh, bosoms. Magi is really hung up on them. It has Aladdin motorboating several characters, including some poor girl who for some reason has her boobs hanging out of her shirt as she sleeps. He even puts his face into a mean wine dealer's chest and asks why a man has boobs. I actually really disliked that particular arc, as it makes the villain this stereotypical evil fat cat with no character aspects beyond greed. Plus, the whole 'if he's a guy, why does he have boobs?' thing, ugh.
It also has a problem with women. At this point, we have met several female characters with names. We have Laylah, a bandit turned merchant, Sahsa, the member of a caravan, and Morgiana, a slave in House Jamil. Laylah gets groped by Aladdin in her sleep and just smiles through it, and none of these women get to protect themselves, leaving the fighting to a little kid and his bara-esque djinn. I think Morgiana has potential, but that's one young woman in a series of mainly men with names and aspirations while most of the women are faceless, nameless slaves and workers in bazaars. Will Aladdin get a female companion? At this rate, it seems unlikely. 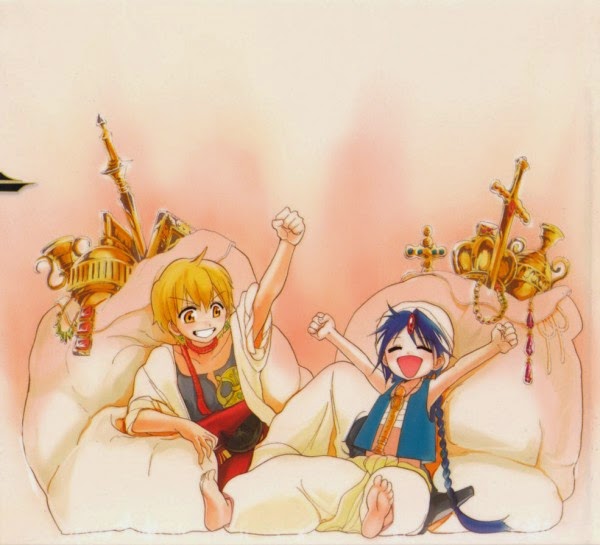 At this point, the most developed character is Alibaba, who Aladdin picks up on his travels only to end up playing second banana to his boss figure. His goals are well defined: he wants to run through some of the magical dungeons that are across the world and gain immense treasure. For him, it's treasure or slavery; he has to make it rich, and Alibaba and his magic flute is Aladdin's ticket into the good life. Unfortunately, he often gets the short end of the stick and ends up running after Alibaba as they escape tricky situations one after the other.
The art for Magi is weird. It can easily flip between lazy and rushed to detailed and interesting. Characters are either adorable and fresh faced or grotesque to look at. Aladdin's djinn, Ugo, is oddly proportioned for something so muscled and bulky. Some of the best art is the more humorous scenes, when the characters' faces go into full freak-out mode, usually over something silly Aladdin just did. And he does a lot of silly things in this series.
It feels like there is a lot of potential in Magi. There's an interesting subplot involving the Qishan Oasis and its lord, and the dungeons themselves can be very interesting as long as they aren't the same. But right now, the main plot seems to be “Alibaba and Aladdin and Ugo dungeon crawl for shiny stuff!” which does not a full series make. I think Morgiana and her master will become a bigger factor in this series. I think the focus will eventually shift from dungeon grinding to something deeper. I think Aladdin's party will grow in the next couple of volumes – Aladdin is a Middle Eastern version of Luffy, and that kind of character attracts companions like flies to honey.


Magi is still on my 'currently reading' list, don't get me wrong. But it's not at the top of the pile. There's a lot of off-putting humor and fan service and flat plot that has moved it down in priority. I need more assurance that it gets better before I make any effort in finding a copy of volume two.
Posted by Sarah at 6:39 PM