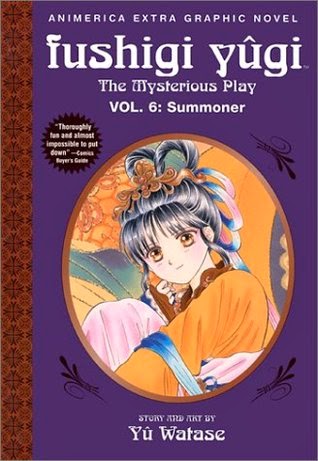 Fushigi Yugi: The Mysterious Play volume 6
Author: Yuu Watase
Viz Media (Animerica Extra Edition)
192 pages
Miaki Yuki is an ordinary junior-high-school student who is transported into the complicated world of a book, The Universe of the Four Gods. Now that she seems to have gathered all seven of her Celestial Warriors, she is ready to summon the god Suzaku who will grant her three wishes. But Miaka's former best friend Yui has become her mortal enemy, and Yui's nefarious general Nakago has a secret plan... (Source: Viz Media)
This sixth volume of Fushigi Yugi is an actual step-up from the previous volumes, but it takes a long time to get to that point. The majority of this book still contains the same tired hallmarks of a Yu Watase shojo series – heroine running off in an ill-guided attempt to make things right, brainwashed lovers, back-stabbing ex-friends, and lots of unrequited crushes and love that never go anywhere. But the ending might show the different and very welcome direction this series is ready to take.


However, the volume opens after Miaka and company were forced to leave a hypnotized Tamahome behind in the kingdom of Seiryu. Miaka, naturally, is heartbroken over having to abandon Tamahome – and Hotohori, in turn, is heartbroken that he can't do anything to help Miaka, and his feelings for the girl certainly don't help anything. When Hotohori and Tamahome eventually cross swords, it'll be up to Miaka to change the outcome of the fight from being a match to the death.
After that, there's a lot of drama and ceremony centered around the ceremony to summon Suzaku. We see Miaka and Tamahome reconnect, Hotohori finally put his tricky emotions to rest, and a very irate Tasuki get mad because Tamahome doesn't remember pummeling his face in. It all eventually leads to the ceremony, and I won't say the exact outcome, but I will remind readers that Fushigi Yugi is not six volumes in total length. So there's that.
I was really getting tired of the Miaka/Tamahome/Hotohori love triangle, so I'm glad that is resolved in this volume. Honestly, it felt like Hotohori was more in love with the idea of the Priestess of Suzaku than Miakai herself. Tamahome has actually spent time with Miaka, while Tamahome was hanging onto a piece of idolation from childhood. It's really no good basis for any healthy relationship, so hopefully he can move on from it.
I'm worried about what this series will do with Nuriko, our favorite cross-dressing warrior of Suzaku. His wish for Suzaku's summoning is to become a woman so he can comfort Hotohori. Considering how many anachronistic elements Watase has already put into this mythical Chinese land, she could have put a base acceptance of homosexuality into it as well. But her continuance to make it the butt of jokes and portray Nuriko as a love-sick whacko, breaks my heart. I don't even want to think about young gay readers who read Fushigi Yugi when it originally was published and thought that Watase saw their orientation as something to make fun of.
Mitsukake has been severely underutilized so far in Fushigi Yugi, and unfortunately this book continues that trend. He stands around, occasionally healing people, and that's it. He's a quiet person by nature but he's never given a chance to really speak up for himself. I want to see the story crack his shell and reveal his character more. Show me more Mitsukake, please!


At the end of the volume, Miaka finally steps it up character-wise. She has accepted her role as the Priestess of Suzaku and realizes that people's dreams are on her shoulders. The fact that people have been hurt or even died to protect Miaka and her mission has not been lost on her. Where this series goes with the girl's maturation will be interesting to see, as long as Watase doesn't forget about it in book seven.
Posted by Sarah at 10:00 AM