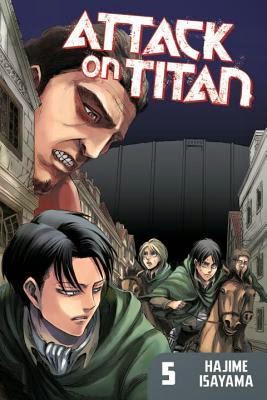 Attack On Titan volume 5
Author: Hajime Isayama
Kodansha Comics
192 pages
Thanks to Eren, humanity has taken the town of Trost back from the Titans. Exhausted, Eren falls into a coma for three days – and wakes in shackles, staring at Erwin Smith, leader of the Survey Corps. Certain that Eren’s father’s research holds the key to the mystery of the Titans’ rise, Smith wants an expedition to retrieve it from the house where Eren grew up. But that’s deep in Titan territory, and to get there Eren will need to master a power he still doesn’t fully understand…(Source: Kodansha)
The fifth volume of Attack On Titan is Isayama making an attempt to temporary put the brakes on the main action. And it works, for 2/3rds of the book. The action slows down and we see Isayama begin to rearrange the cast to his liking. But this a series about the terror of humans living under the thumbs of flesh-eating giants; it doesn't stay quiet for long.
This volume deals with many of the issues that were raised in the previous volume, from Eren's current Titan abilities to the mystery of whatever the heck is in his basement back home. Surprisingly enough, this soon becomes common knowledge and what defines Eren's worth in the Survey Corp to everyone beyond Armin and Mikasa, who are currently his only true friends in the world.


Part of the volume revolves around Eren's struggle to fit back into a world that sees him as a monster. He can't remember what he's done in titan mode, so he doesn't fully understand why everyone looks at him with fear and disgust. His new abilities confound both him and modern science – when Eren gets popped in the mouth and loses a tooth, he soon regrows it, much to the surprise of squad leader Hange.
Hange – and I'm going with the Kodansha Comics' version of her name here – is a strange, fascinating character. Her experiments with the two captured Titans show a combination of scientific curiosity bordering on a masochistic need to be deeply involved and an odd respect of what humanity may be lurking within the bodies of their enemies. She has no problem sticking them in the eyes with long sticks but weeps as she does so and cheers them on to survive – so she can perform more experiments. Hange is a body containing many contradictions, an adorable mad scientist in glasses and ponytail, and I look forward to seeing more of her.
The majority of the volume, however, involves the splitting of the main group. I think Isayama is smart to split up the core group. It allows the reader to see more perspectives of the overall society, not just the ranks of the Survey Corp. It also gives us one of the most emotionally charged scenes so left, as we see the people who have the actual bravery and inner strength to give up their lives for the corp.
Luckily for fans of Eren and Mikasa's squad, the end chapters of the volume follow the Survey Corp exclusively, where the main action takes place. I'm pretty sure hunting down Titans is a lot more interesting than whatever the Police Brigade does on a regular basis. Luckily, we see the Corp begin to use – gasp! - actual strategies in their battles, which should hopefully mean less people dying beyond the wall.
As for the infamous artwork, Isayama isn't going to win any awards anytime soon, but there's been a gradual and marked rise in quality since the first volume. Faces and bodies are better defined while the Titans retain their grotesque facial features and whacked out body proportions that suit them so well. The best scenes, art-wise, lack backgrounds; they really allow the linework and the emotion of the scene to pop out without being obscured by architecture and skylines.


Overall, it's a very solid volume of Attack On Titan that manages to push the story along to a point where the action can appropriately get kicked up. A lot of characters are spotlighted, the mysteries behind Eren are explored, and we break away from the norm to put certain people where they belong. I'm six volumes or so behind on this series, but I'm enjoying all of the catch-up.
Posted by Sarah at 5:16 PM

Email ThisBlogThis!Share to TwitterShare to FacebookShare to Pinterest
Labels: attack on titan, manga