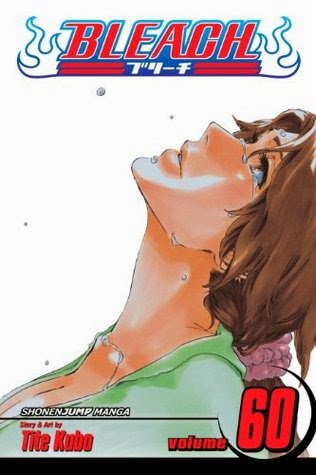 Bleach volume 60
Author: Tite Kubo
Viz Media/Shonen Jump
192 pages
Everything But The Rain: As the rain falls in Karakura Town, Isshin faces off against a mysterious Black Hollow. But when a familiar face joins the fight, Isshin will need all the help he can get. Ichigo's dark past is revealed, but can he recover from the shock of finally learning the truth?! (Source: Viz Media)
It's pretty obvious from the beginning of the 'Everything But The Rain' arc that Kubo has a story he has to tell, or else Bleach as a series will never proceed properly. He's gone long enough without telling Ichigo's true origins, and so does so in the manga's sixtieth volume, which is a great milestone for a title of any genre.
As a whole, it's a volume that answers a lot of lingering questions, including a few readers probably didn't realize they had, shedding light on Ichigo's past as well as the history of the Shinigami and the Quincy.


The problem is, this volume lacks any surprises until the very final couple of pages. It's rather content to check off all the fan ticky boxes associated with this arc but not go far beyond that. We see fan favorites such as Isshin, Ryuuken, Urahara, Ichimaru, Tosen and Aizen interact in ways they hadn't previously in the current chronology. And honestly, just seeing a younger, flustered Ryuuken – a complete flip from his usual calm demeanor in the present – is worth all the trouble leading up to it.
We also see how Isshin creates his pharmacy, the experiments performed by Aizen in Soul Society, the death of Masaki, how Isshin was stripped of his Shinigami duties – all things fans have been waiting to see. But barely any of these reveals come out of nowhere. They all make sense in-universe, although some are more impressive than others.
But there's no doubt that Kubo has been slowly planning these revelations for a while. Some of them are so far ingrained in the basis of the series that it would have been impossible for it to not be planned. Suddenly, Ichigo's powers, which have flummoxed Soul Society and fans for years and years, make sense, as does the very origin of the Kurosaki family itself – which, in a very Doctor Who/Amy and Rory Pond kind of move, takes their surname from Masaki, not Isshin.
At the end of Isshin's tale, we see Kurosaki move on before Kubo throws in a half-hearted series of small scenes featuring various Soul Society characters. The only one I cared about was Hitsugaya, who has joined the lower ranking Shinigami to retrain and regain his broken ban kai. It was a way to show how splintered the Seireitei has become in the aftermath of the Quincy assault, but against the Ichigo and Isshin scenes, they felt inconsequential in scope.


Which is not to say that Bleach's big 6-0 is a bad volume. There are a lot of good scenes, and the ending is a hellishly clever twist that shakes apart everything we've known about one of Ichigo's core powers. But it's a ploddingly basic serving of a story that could have benefited from a few more bombastic storytelling techniques. Hopefully, this isn't a sign that Kubo is running out of steam near the end of the line and is in a rush to finish the dang manga once and for all.
Posted by Sarah at 11:27 AM