Spoiler warning: Spoilers for the ninth episode of Accel World beyond this point. Don't read if you have not watched! 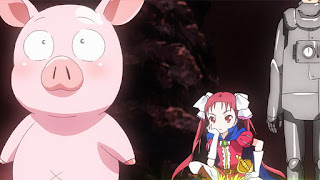 For an episode labeled "Escalation" - well, things certainly escalated, especially for poor Haruyuki. He's got two cute girls vying for his attention – one princess-type yandere (Kuro) and one small but aggressive tsundere (Niko) at that – and has now been roped into a horrifically risky scheme to take down the fourth Armor of Catastrophe as his is the only avatar who can get close enough.

Suddenly, Haruyuki has all this darn responsibility and so many people relying on him to get stuff done and pretty much save all of Brain Burst from a berserk set of armor intent on destroying everything. And he has to do this while flanked by his two lady protectors, who are both keenly invested in getting close to his . . . avatar.

Oh, the burden of being Haruyuki, slowly but surely amassing his Burst Link harem. And, um, Taku.


Which, by the way, Taku, stop playing with your fake glasses. As someone who wears actual prescriptions, it pisses me off quite a bit. You don’t have trouble seeing. Straightening them out or adjusting them doesn’t change a thing. They are just there to serve your wounded ridiculous ego some sort of psychological purpose that has no real effect on the story.

Although I do find it fascinating that his ‘regular’ avatar while in direct link mode is him dressed in armor, like a knight. After all, consider Taku’s story arc so far; it has been centered on finding the real Taku and separating him from the avatar that was threatening Kuro and Haru earlier. It’s also been about Taku hiding his true self from his friends, even his own girlfriend, because he’s afraid of rejection. 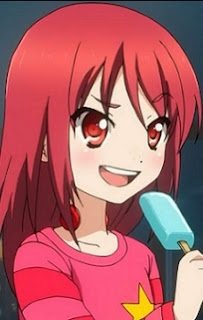 The armor, in that context, makes perfect sense; on a baser mental level, Taku considers his true self locked away under layers of other identities – Taku the boyfriend, Taku the ideal friend, Taku the Burst Linker. We probably have not seen the real Taku yet; even Taku doesn’t know who that is yet.

The more of Niko/Scarlet Rain we see, however, the more we see how much the world of Brain Burst can consume a person. She hints to Haruyuki that the time she and Kuro have spent inside the game would blow Haru’s mind. So – months? Years? Decades?

Also, she mentions than in hunting down Haruyuki’s real life face, she spent over 200 burst points to narrow it down to just Haru. That is a lot of burst points to spend so casually. How powerful is Niko really? I would love to see her monstrous armored avatar in action again soon, just to see what kind of damage she can do to a real opponent (sorry, Silver Crow!).

Otherwise, this was a surprisingly humorous episode! I found myself enjoying the scenes where Kuro and Niko square off, and I’m not usually a big fan of girls vs. girls-related humor. Maybe it’s because we get to see so many great Kuro facial expressions?

Apparently, the best way to make Kuroyukihime lose her calm cool princess demeanor is to make lewd suggestions at her boyfriend and make him use a ridiculously short cable for direct linking. Ha!

It is also nice to see Kuroyukihime so protective of dense little Haruyuki, who is only now realizing how many girls are lining up at his door for a piece of that (yeah, Niko, only interested in his avatar my left foot you are). She is clearly capable of becoming the knight in this relationship while still staying the queen, if that makes sense. 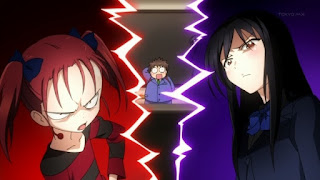 This is the guy who was perfectly willing to rip a page out of the book of visual novel and rom-com anime book of clichéd scenarios just to see a bit of Kuro and Niko boobage. Actually engaging in a traditional romantic relationship is probably beyond his current comprehension. Seriously, can anyone see Haruyuki honestly taking out Kuro on a real date that did not involve Brain Bursting or acceleration? Not me.

(Raise your hand if Kuroyukihime suddenly sucker punching Niko in the stomach to stop her from revealing details about what Kuro looks like naked is one of your favorite moments of the series so far. Yeah, I thought so. Me too.)

As for the actual plot itself, it is nice to see more and more of the stories of Brain Burst itself rise to the surface. The story of the Armor and its previous wearer gives the Brain Burst world another layer of depth and history. It also gives insight into the world of the Kings, as Kuroyukihime – still in play as the Black King – is one of the major factors behind the destruction of the first Armor of Catastrophe.

It also raises the question of items and how one can keep coming back to attack people through possessing people. That seems like an oddly advanced technique for what is a role-playing game, but I suppose that is yet another mark of how Brain Burst is not just another game. Weapons that can control other plays by force? Yikes. Chrome Disasters sounds like this series’ next big story arc.

And if any of the above has you scratching your head and wondering what the heck Accel World is doing, you have another week to consider each and every plot twist that has presented itself. Accel World is on break until the fifteenth! So, um, enjoy this unexpected break. Spend it writing Kuro/Haru/Niko fanfic if you know what’s good for you.

As usual, you can watch subbed streaming episodes of Accel World on either Hulu or on Viz’s website.
Posted by Sarah at 11:54 PM