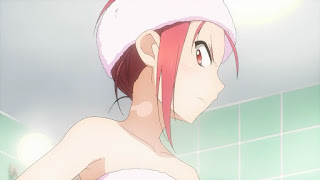 Spoiler alert: Post contains spoilers for episode 8 of Accel World. Do not read until you've seen said episode (or don't care about spoilers)!

It seemed to have to happen. Accel World's eighth episode was surprisingly heavy in fanservice of the bath time variety. Or is it that surprising? After all, the entirety of Accel World is built around pandering and personal fulfillment of one's deepest wishes. For some, it is to become stronger and beat back those who bully. For others, it is to see a cute girl wiggle about in a towel, pouting and blushing. Well, no one said these wishes were similar.

Also, what is more wish fulfillment for the modern otaku than a fully immersive online role-playing game that you can access anywhere at any time and get into adventures like something out of .hack's The World? Not much!

The problem with a lot of fanservice in recent series is that it is often detrimental to the story and simply inserted to titillate the hetero dude audience (because let's be honest, anime companies don't exactly cater to LGBT fans outside of yuri/yaoi series, especially not in terms of fanservice). Now, I would argue now that the fanservice in Accel World actual serves the plot more than takes away from it.

That's right: seeing Haruyuki goof around with the second Red King, both in nothing but towels, was necessary to the story. Now let me explain why.


Let's start with the general fact that there was fanservice in Accel World. We saw Scarlet Rain dressed in nothing but a bath towel - and Haru as well, but let's save that for later - in an attempt to seduce Haru through one of the strongest forces known to otakudom: pseudo-incestful jail bait. Why else the "Ore no Imouto ga Konnani Kawaii Wake ga Nai" joke (which was genius)? That is part of Scarlet Rain's cunning; she used one of an otaku's darkest kinks against them. It probably would have worked too, if it weren't for the Accel World equivalent of Facebook exposing her scam.

In a way, Scarlet Rain's moment of fanservice is just another part of the Brain Burst system. She is using the physical allure of her body as an extension of her avatar in order to seduce and then destroy her opponents. For her, it is not a moment of sexuality as much as an act of pre-emption against her opponents. Her body, like her avatar, is a weapon. 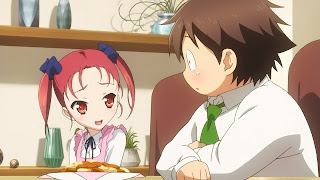 And that is true even in Brain Burst. When one is dueling via their avatar, it is their body that is fighting along with their consciousness. Sure, it may not be in the same exact vein as Evangelion, where the pilot becomes a vital organ in their mecha to the point that every hit the Eva takes is a hit the pilot's body takes, but I'd like to think the creators of Accel World aren't as deranged towards their young protagonists as GAINAX is. Still, it is evident that when Haruyuki is in battle, he can feel what is happening to Silver Crow, whether it's pain from an attack or the exhilaration of using his wings for the first time. And I'm sure the same is for Scarlet Rain - although in her battle against Silver Crow, we don't exactly see a lot of pain on her end. But then, it's hard to attack someone who is protected by a bright red fortress of metal cubes and huge effin' missile launchers.

So there you go. As the Red King, it only makes sense that Scarlet Rain would use her physical self as she would her avatar, so far into the Brain Burst system as she is, in order to defeat one's opponent. And she did really defeat Haruyuki in the end. She defeated him in combat and got him to set up a person-to-person meeting between herself and Kuroyukihime, which is pretty monumental considering Kuro's status as an ex-King - the one who destroyed Scarlet Rain's predecessor and got him eliminated from Brain Burst. Scarlet Rain ain't nothing to mess with, in or out of her clothes.

Now, I can't talk about fanservice in Accel World without touching upon Haruyuki's own state of undress. And some people may not consider his flaunting of schoolboy skin fanservice. Well, it is certainly not what is traditionally considered fanservice, I'll grant you that. Fanservice is meant to excite, to provoke sexual feelings; I don't know any Accel World fans that are sexually attracted to Haruyuki, to be honest. 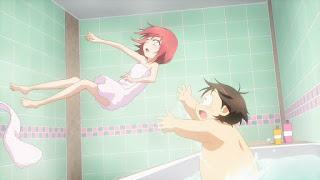 But seeing Haruyuki in a towel was about attraction, sexual or otherwise. It is about having a fat protagonist lead a popular series and showing that protagonist as one would in any other program about young adults, which means sitting in the bath and flailing about in a towel. He is not penalized for being overweight by the camera. I would not say that the camera falls upon both Haruyuki and Scarlet with the same exact kind of gaze – and anyone who says differently should really read up on “male gaze” in anime – but both of them are treated with respect by the camera as much as any other character in their situation.

Also, it highlights the fact that Haruyuki is not his avatar. Silver Crow may have come out of his own insecurities and faults, but it is not Haruyuki. In the end, Haruyuki is a young man who pretty much lives by himself (his parents out of the picture enough to make this so), juggling school and relationships and social media (i.e. Brain Burst/the accelerated world) while fighting his own issues.

I’m sure his body image issues are a major part of it; consider the fact that his normal online avatar is a pink plump piglet, cute but still a farm animal in the eyes of society, something to be raised for the slaughter. And this is how Haruyuki initially sees himself – another fat body to be thrown away. But the more the series progresses, the more Haruyuki becomes comfortable within his own body. It becomes a body worth improving, a body worth protecting, even a body worth loving.

So we as an audience get to see Haruyuki at a point in his life where he is comfortable with his body, which means seeing his physical self without the avatar and without the school uniform, but the way he sees himself when he is vulnerable. Granted, there is still a towel between the audience and Haruyuki, and I don’t expect that towel to ever vanish, but it’s a moment of progress. In this moment, Haru becomes a little bit more real.

Now, having said all of that, the ‘accidental’ slip-and-grope was pure silliness verging on “wait, what” and I’m not even going to dignify it with a significant amount of wordage. Except that Haru now has a clear record of being a breast guy. Hey, you have a girlfriend, Haru! Mess around with her chest!
Posted by Sarah at 7:02 PM