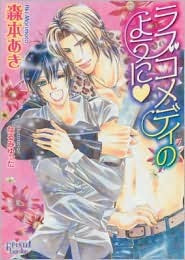 Biwa was a fledgling screenwriter working at an American TV drama production company. Now, he's been named to a drama production team But, before the team's first meeting, Biwa, distracted, slams into a man he doesn't know, who glares at him. It's Japan's top actor, Yamato Toyohira, the star of the drama Biwa is supposed to be his assistant, but Yamato's arrogance is driving him crazy. (Source: Goodreads)

I never thought I'd find a boys' love prose novel that would sate my love of screenwriting, rolebending seme/uke dynamics, seemingly hopeless love, and Frasier references all in one go - and yet, that is exactly what Aki Morimoto has written with Like A Love Comedy, a light novel released by Digital Manga's prose arm of publishing, June. Coupled with Yutta Narumi's quite lovely (and sometimes rather steamy!) artwork, this story really reads well for something originally published five years ago.

The drama of working on a tight deadline for a risky television pilot mixes with the unlikely romance between a fledgling screenwriter and a Japanese actor looking for his American debut on the small screen to create quite an enjoyable and quick experience.

You can read the rest of my review after the jump!

If you've been looking for a boys' love novel perfectly tailored for those obsessed with the behind-the-scenes side of writing for American television studios, Morimoto has brought it to you in perfect form. She uses the lingo of the trade and shows how difficult it is to get a series up and running; just getting the pilot written, cast, shot, and greenlit by a studio for a full season is living hell for anyone involved. And yet, for our main character Biwa, this is his biggest shot at becoming the star writer he's always wanted to be. Too bad his primary job on staff is to babysit the Japanese diva actor Yamato, who he is already at odds with from their first chance encounter.

But nothing is what it seems in this story, as Biwa discovers that Yamato was just as nervous as everyone else - and was having a bad day. Some may say that Morimoto pushed aside a great opportunity for the two men to be antagonistic for a little longer, but how productive would have that be? Besides, Yamato turns out to be just as stubborn and off-putting as possible, the foil to Biwa's nervous energies and headstrong attitude which turns to thoughts of love the more time he spends around Yamato.

As for Yamato and Biwa's relationship, it is surprisingly organic. They do spend a lot of time together, but considering they are also working on a television set, they also have to deal with their roles of the main star and the script writer. With that, their scenes together are delightful. They have a true banter that starts before Biwa even considers being kissed by the other man. I found it adorable that Biwa couldn't understand why his heart would beat so fast around Yamato at certain times. Biwa, honestly!

Also, the sex - yes, there is sex - is so very much in character. It isn't just two characters having sex, it's Biwa and Yamato and even if you took out their names, it is very much them by the way they act and talk and move around each other. There's only one truly smutty scene between them, but it is so satisfying and lengthy that one can be forgiven for Morimoto only including the one moment of explicit passion between her two boys.

The art is by Yutta Narumi, who has also illustrated stories such as My Wild Servant and Tsumetai Kemono ni Kawarete (I don't think these titles have been licensed - yet!). I found her depiction of Biwa to be absolutely adorable and huggable. Yamato was pretty handsome but at times, I found his bodily proportions to be out of whack. The picture of Yamato and Biwa's initial meet-up made me wonder why his head was so small compared to his body, but luckily she doesn't repeat this odd mistake in following images.

This is one of those stories that scream for some sort of sequel or side-story, especially given the ending. Maybe there's a short story sequel in one of Morimoto's other books, I can't say for sure. All I know is, I truly enjoyed reading Like A Love Comedy, from picking out all the cleverly veiled TV sitcom references to watching Miwa realize how head-over-heels in love he's become for the man he once considered a total prick and waste of time. I'm sure to pick up any other of Aki Morimoto's light novels I see thanks to June.


For more information on DMP titles, releases, and the latest news, visit the Digital Manga Inc.'s website: http://www.digitalmanga.com/
Posted by Sarah at 5:39 PM