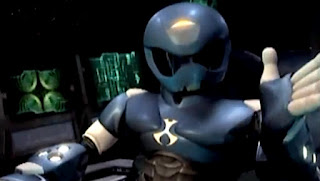 Also known as: Yes, I've Finally Gotten Around To Blogging Properly On The New Toonami Several Weeks After Its Debut, Sorry!

So Toonami - the shiny brand new Toonami - came back several weeks ago amid a ton of excitement from otaku who are old enough to remember the old, classic Toonami, the one with Gundam and Sailor Moon and Outlaw Star and Dragon Ball Z and Ronin Warriors and Blue Submarine No. 6 and . . . well, you get it. It had a lot of anime.

The problem is, new Toonami does not have the budget for a ton of shows, new or otherwise. Which is why, along anime that had already been airing on [as], like Bleach and Full Metal Alchemist: Brotherhood, Toonami premiered two titles which may be familiar to those who pay attention to Funimation's licenses: Deadman Wonderland and Casshern Sins.

You can read my review of the new shows of Nu!Toonami after the jump!


Now, I'm not here to talk about the aesthetic value of new Toonami because let's be honest, it's not terribly different from the how old Toonami looked before it went under. Tom looks as fantastic as usual, doing the usual host shtick, and they even kept Toonami's history of airing mini-Tom-hosted reviews of video games and other media. And, of course, the old ship of Tom is back. I can only wonder if they'll be putting Tom and his beloved ship through some 'plot twists' like back in the old days - or keep him doing hosting duties only.

Really, my focus is on the new shows being aired in English on Toonami's new line-up, Deadman Wonderland and Casshern Sins. Both have been watchable via online streams through either Funi's site or Hulu. Casshern Sins is also available for purchase via DVD; Deadman Wonderland's manga counterpart was being released via Tokyopop before that company tanked. So they are really not 'new' titles . . . unless you only watch anime on TV, in which case these shows are entirely new to you! Or you are me, because I did not bother watching them when they first aired!

Slight admittance: I've read the first, oh, four or five volumes of Deadman Wonderland's manga. So that story is not new to me, although it's been a while since I've read any of DW. But Casshern's tale is brand new; I've only heard from friends and ex-friends that it is a good show, and little about the actual story of it. 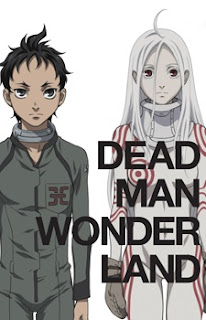 Let's start with Deadman Wonderland, based on the manga by Kazuma Kondou and Jinsei Kataoka, clocking in at twelve episodes - thirteen if Toonami decides to air the OVA, which considering they aired Durarara!!'s OVAs, I wouldn't count it out just yet.

The story is actually surprisingly simple on its surface. A young Japanese boy named Ganta is framed for the murder of his school mates and sent to the fantastical and horrifying privately owned prison, Deadman Wonderland, where prisoners are put on display and made to perform for the public like they are at an amusement park. Well, if the amusement parks you know of spurted more blood and guts than a Quentin Tarantino film. His only friend is the mysterious white-haired girl in a body stocking named Shiro, who is always amazingly cheerful and around to save Ganta's neck from trouble.

The art is slick, I'll give it that. Manglobe actually did a pretty good job conveying the horror carnival atmosphere of Deadman Wonderland as well as the character designs. The mysterious red man in the first episode was particularly well crafted, although I have to wonder if they toned down the bloody carnage of the original manga scene to make it TV palatable without losing its bite. The music is so-so, nothing to really write home about; it does not help that Toonami has truncated the opening and ending themes dramatically to make room for more adverts.

It is hard to judge Funimation's English dub of the show, having not seen it subbed, but set against how I felt the characters sounded in the manga, I don't hear any jarring miscasts so far. Ganta sounds a little more juvenile than I would have imagined him to, but that might have been a move on the dub cast's part to really highlight his youth and his misplacement as a teenager in prison on a charge of mass murder. His fresh face plus that squeaky voice equals how could any kid like Ganta commit such a heinous crime, right? And it works, although I only imagine the painful voice acrobatics Greg Ayres has to perform to keep the squeak on.

My favorite dub voice so far is Chief Makina, the baddest bitch in Deadman Wonderland. Can't get enough of her - or Colleen Clinkenbeard's performance. She does a great job of portraying Makina's brand of sultry sociopath in charge. And if her voice work sounds familiar, it should; she has also voiced XXXHOLiC's Yûko Ichihara, One Piece's Luffy, and Scanty in the soon-to-be released on DVD Panty & Stocking with Garterbelt. Can't wait to hear her in that!

Overall, Deadman Wonderland has been doing a decent and entertaining job of translating manga to animation, including all the colorful violence and madcap adventures that Ganta gets himself into on a regular basis. I've heard the adaptation gets worse in later episodes, but so far I'm greatly enjoying this series. A good fit for Toonami's reboot, I have to say. 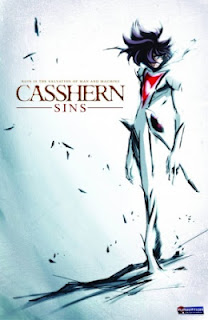 The complete whooping opposite can be said for Casshern Sins, an apocalyptic tale of robots on the brink of extinction. Somehow, the entire world is falling to ruin and it is all Casshern's fault. Problem is that Casshern does not even remember his own past or who he is. Casshern has to find himself if he wants to stop the ruin and blah blah blah, whatever.

As someone who loves me some deep, thoughtful, psychological sci-fi series like Paranoia Agent or Texhnolyze, Casshern Sins so far has been a huge disappointment. To everyone who told me this series was great: are y'all trolling me? Damn.

When it comes to Casshern Sins, the main problem I have is that I don't care. It has not given me any reason to care about Casshern, his issues, or its supporting cast. The only character worth writing home about is the little girl from episode one that almost befriended Casshern.

This is a shame, because there is a ton of potential for Casshern as a character, a robot without a past caught between living as a nameless wanderer and as a mad berserker. But in a serious with drab boring art design and a forgettable score, the lack of an attention-grabbing story is pretty much this show's death knell. I can't even talk about the voice direction, that is how much I did not care.

This isn’t to say I’m going to stop watching it, because I’m giving Casshern Sins the benefit of the doubt. Even Texhnolyze, a personal favorite of mine, took a few episodes to hit its stride (the first episode of that series didn't even have DIALOGUE, for goodness' sake); Casshern Sins may need a couple more episodes to get into the groove and get my attention properly. And both of these new shows deserve all the views in the world, so the head honchos of Cartoon Network can see that Toonami is a viable programming block that can bring in viewers and can use newer programming. So I shall suffer for the sake of many, because I love anime that damn much.

And because I'm still holding out for Panty & Stocking to air on American TV, uncensored and dubbed. I am not alone in this, I am sure!
Posted by Sarah at 9:02 PM