Novel Review: The Future Is Japanese 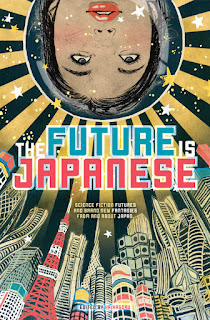 A web browser that threatens to conquer the world. The longest, loneliest railroad on Earth. A North Korean nuke hitting Tokyo, a hollow asteroid full of automated rice paddies, and a specialist in breaking up “virtual” marriages. And yes, giant robots. These thirteen stories from and about the Land of the Rising Sun run the gamut from fantasy to cyberpunk, and will leave you knowing that the future is Japanese! (Source: Goodreads)

I don't do anthologies. Well, short story anthologies at least; I've no problem when it's poetry or non-fiction pieces. The problem with (short story) anthologies and myself is that I get too attached to the characters and the setting of one story, only to have it end too soon and leave me wanting for more although I know full well there won't be. Plus, with so many authors in the pot, the likelihood of several bad apples spoiling the bunch climbs higher and higher.

But I felt obligated to pick up Haikasoru's collection of sci-fi/fantasy stories from and about Japan, mostly because it is Haikasoru and they are known for quality fiction of those genres (and typing that makes me wish I had picked up the paperback of Battle Royale I'd seen in a new and used book shop today, whoops). And this is a decision I do not regret, and neither will anyone else who follows suit.


Having said I don't do anthologies, I'll say that I can gladly amend that to exclude anthologies edited and released by the Haikasoru imprint, so long as they maintain the same consistent line of quality storytelling and writing that is present in The Future Is Japanese's own stories. This is not to say that every story in this collection is perfection, but even the weaker stories of the bunch are entertaining enough for the duration.

What is great about this collection by Haikasoru is that there's an aspect of the sci-fi and fantasy genres for everyone. There's cyberpunk and there's ghost stories; there's people in space and people in robots and people in computers burrowing through the million duplicate minds of a serial killer long dead. And it all balls up into this wild, mad world of technology and mythology that represents Japan's culture like little other.

Look at the opening story of this collection for confirmation of this: “Mono no Aware” by Ken Liu; it is a story of the survival of humankind in the face of oncoming extinction and the strength of the human spirit in the face of catastrophe. We as readers follow a young man, Hiroto, who through unordinary circumstance becomes one of the few people inside the solar-powered ship heading toward what will probably be its final destination in the hopes of saving the population onboard.

As he is hurtling through the stars, he cannot forget his family back on Earth and the games of go he used to play with his father. It’s these memories of Japan – the go, the poetry, the cicadas in the summer night – that give Hiroto his strength and his resolve when it seems like all hope is lost. It is this fusion of culture and machinery that gives this anthology its unique flavor. Even when the story is not explicitly set in Japan or at all, it still maintains that particular quality.

Some of the stories are pure fantasy, however. And for the most part, they are spectacular. The only one I was not in love with fully was Catherynne M. Valente’s “One Breath, One Stroke”, a tale of some unusual spirits who live between two worlds, separated by one barrier. It was lyrical and beautifully written, but plot-wise left me feeling empty. However, if you are a big fan of Valente’s writing and you don’t mind the absence of a coherent storyline, then you will no doubt enjoy her entry in this collection.

It’s hard for me to pick an absolute favorite among the shining stars of this anthology, so I’ll split the honor among these three: “Chitai Heiki Korobin” by David Moles, a teens-piloting robots story with a dark heady twist; “The Indifference Engine” by Project Itoh, in which there is a civil war and colonial forces try to take the concept of colorblindness to a dangerous conclusion; “The Sea of Trees” by Rachel Swirsky, where a girl makes a living stealing from the dead and must guide a lost daughter to find the lingering spirit of her deceased father.

Ignore the fact that all three of these stories follow each other in said order in the book – I swear that is one heck of a coincidence. So I’ll throw in as an honorary mention “Golden Bread” by Issui Ogawa, a marvelous little gem in which a soldier is kept as a prisoner of war and must acquiesce to village life among his enemies.

And these are all authors I would gladly read whole novels’ worth of original material from, which to me is the mark of not only a good story but a great collection, if it is able to promote its included authors to that extent. So my hat is off to you, Haikasoru. You made me love an entire collection of assorted stories, for better or for worse. Sure, I may not have been enchanted with every piece, but the ones that blew me away more than made up for the ones that I found lacking. And that is how, ladies and gents, the Haikasoru imprint bought my wallet’s loyalty. I wonder which title I’ll buy next. Project Itoh’s diverse collection of books is looking mighty good right now.

Be sure to visit Haikasoru on Twitter and tell ‘em how much you love their stuff. And keep an eye out for their essay contests; you can win copies of their books that way!
Posted by Sarah at 12:00 AM