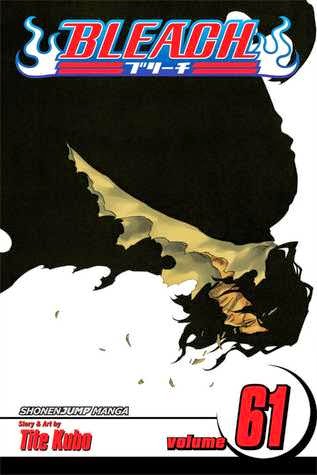 Bleach volume 61
Author: Tite Kubo
Viz Media/Shonen Jump
192 pages
With the true identity of his sword finally revealed, how will Ichigo take the next step forward? Will his new Zanpaku-to be enough to stop the invading Quincies? And just where does Uryu stand in all of this...?
I think I've reached the outer limits of how much mercy I can grant Tite Kubo for this series. It's a series that has run for over sixty volumes, and some of Kubo's tricks are getting tiresome to read. Of the main Weekly Shonen Jump trio of titles currently running, Bleach is easily my least favorite of the bunch, and it's because of chapters like these.
This isn't a terrible volume, since it does advance the Quincy/Soul Society war into a new stage and has a few good moments, but some mishandling of essential characters and a flood of new Quincies drag the whole book down. Not every book of Bleach is going to be a winner, but a lot of this seemed phoned in even by Kubo's own standards.


The book opens with Ichigo confronting the man known as Zangetsu who is both not and yet is. In a powerful moment of Ichigo's story so far, he accepts both of the Zangetsus as part of him, in turn accepting both the Shinigami and the Quincy part of his heritage in the process. It's fascinating, a great cap on his recent journey to understand his past and his immense powers, and unfortunately, it is never returned to through the rest of the book. Two chapters of the main character and then he is MIA for the remainder? Kubo, please.
The rest of the volume is split between the drama in Quincy land as Yhwach selects his successor for king and the final invasion of Soul Society by the Quincy army. I like that it shows how complicated inner Quincy politics is—the whole thing is a bit Game of Thrones—but now there's 10-20 Quincy characters I know nothing about and have been given little reason to care about. It doesn't help that a lot of them fit into Kubo's favorite character archetypes, down to the oddball aesthetics and 'humorously' crude attitudes.
However, we do get to see how Soul Society fights against the Quincy and how certain characters have recovered after losing their ban kai abilities. Hitsugaya, without spoilers, is especially impressive during these chapters. There's a reason he was made captain, and he's been proving it time after time. Also, Soi Fon is still a legitimate badass with a license to bear arms, nudge nudge.
Overall, though, the Quincy War arc has been more on the disappointing side. If he wasn't a manga-ka, Kubo Tite would be a terrible architect. He would pour and set only half of the foundation and pour the rest of it later. He would get so caught up in the trimmings that he'd neglect the support beams. In its 61st volume, Bleach is more concerned with looking cool and shocking readers than explaining why things are happening.
It's starting to look like Kubo only planned so far before running out of steam, like he reached the end of Ichigo fighting Aizen, decided a 'Ichigo regaining his powers' arc would be cool, then realized he never explained the Quincy society and tacked it onto the end. Which is a shame because up to now, the story has been rather decent, but now it's bending under the weight of a interseries history left explained until the eleventh hour.
I want a refocus on the war between Seireitei and Quincy and how it reflects in the relationship between Ichigo and Ishida, which will certainly become even more strained than ever. I want to see how this effects the world of the living beyond "will Ichigo's friends ever see him again?". I want to see how Ichigo will fare at the end of all of this, if he will completely eschew his old life to join Soul Society or take a different path. And I want a Don Kanonji cameo, dang it!
Now that the (supposed) final battle has started, Kubo may go back into his wheelhouse and service us with a higher quality collection of chapters. Right now, looking at book 61, it looks like he's not in that place yet. He had to get through the 'boring' stuff—the things that set the foundation for his ongoing plot—to get to the fighting. Now that the swords are out and the blood has hit the walls, Bleach can rise up again and become better for it just in time for the last act.
Posted by Sarah at 4:16 PM