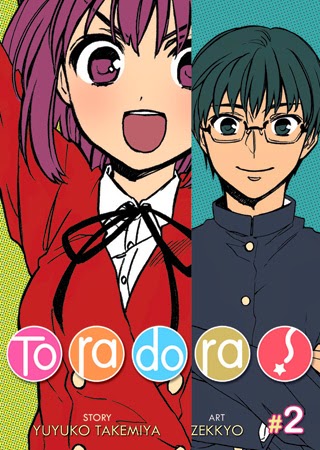 Toradora! volume 2
Authors: Yuyuko Takemiya, Zekkyo
Seven Seas Manga
192 pages
It’s taken time, but Ryuji and Taiga have slowly found some common ground and can at least tolerate each other. The problem is everyone in Ryuji’s class is now convinced that he and Taiga are dating—even Minori! To make matters even more embarassing, Minori has given Ryuji and Taiga her blessing. How’s Ryuji ever going to win Minori's heart now?!
Spoiler notice: Some spoilers, although none major plot points, for Toradora up to volume 2 are in this post. Read on with caution.
I know that I was incredibly apprehensive when I first started Toradora's manga. I thought that the series was too wrapped up in Ryuji and Taiga to make things interesting. I didn't think that the series could effectively grow beyond their oddball master-and-servant hijinks. I was wrong, and I am glad I was wrong, because the warmth and emotional depth of this volume proved that Toradora has a heart worth exploring.


In the second volume of Toradora, Ryuji and Taiga struggle with the public perception of their curious friendship as a romantic entanglement, especially since their respective crushes believe it too. It takes some big gestures to set things right, and in the process Taiga is forced to be strong and reveal her true feelings to the one person she's been hiding them from the entire time: Ryuji's friend, Kitamura. Meanwhile, even though the agreement between Ryuji and Taiga has dissolved, it looks like their friendship will go on, stronger than ever.
It's clear that Taiga and Ryuji have very strong, distinct personalities, but the one-dimensional nature of society has decided to put them into boxes, limitations that they actively struggle against. The one who chafes the most in these chapters is Taiga, who has an open meltdown in front of the only person she can show her true self to. She's tired of being the palmtop tiger, tired of people seeing a false image of who she really is, and tired of the fear of being rejected by Kitamura and everyone else if she lets her guard down for a second.
The scene where Ryuji and Taiga, dragon and tiger, let all of their frustrations out on an innocent street light is one of the strongest in the book. I actually really loved all of the 'big' scenes - the street scene, Taiga trashing the classroom, the confession, the face-off between Taiga and Ami Kawashima, who is terrible and should feel bad about her active life decisions. They're dramatic and exciting and highlight the colorful cast of characters that moves Toradora as a series along.
The relationship between Taiga and Ryuji is obviously the biggest highlight of this volume, but we can't forget about Taiga and Kitamura. I want to root for them but Kitamura is so earnest, it's almost a fault. It also puts him at odds with Taiga, who is so lovestruck that she can't bring herself to properly correct any assumptions Kitamura makes about her. At this rate, the two of them will never see each other as actual equals and their relationship will flounder before it forms.
Luckily for us, manga-ka Takemiya has introduced another character to shake things up and keep events lively. I can see now that young model Ami Kawashima, who reveals her true nature in a scene that will turn everyone into Taiga fans and takes actions to purposefully antagonize our main characters, is a reactionary force of nature. Ami actively uses the public perception of her character to operate her own schemes, making her the most dangerous character of the pack. I dislike her but I want to see what she does!
I truly enjoyed Zekkyo's artwork in this volume. They have a great handle on displaying emotions in both facial expressions and the overall look of a scene, especially when it comes to lighting and shadows. When things get comedic, Zekkyo can easily set the funnier scenes apart from the dramatic scenes with a certain aesthetic style that is distinct and amusing. I'm a sucker for artwork that spills across multiple panels and their borders, which Zekkyo does several times with Taiga's long flowing hair. There's a fair amount of page effects - sparkles, textures, that sort of thing - but it isn't overwhelming or distracting.
Toradora is still a fun series filled with wild misunderstandings that can only arise in a high school comedic manga, but it has found its emotional center with Ryuji and Taiga, our fearless protagonists and steadfast companions. With the added elements of Ami and the awkward cluelessness of both Kitamura and Minori, it'll be interesting to see what the dragon and his palmtop tiger boss-friend will have to do to let their true hearts be known, clearly and without confusion.
Posted by Sarah at 9:25 PM