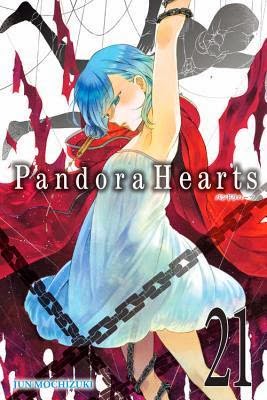 Pandora Hearts volume 21
Author: Jun Mochizuki
Yen Press
208 pages
"I want you to be 'happy'..." With these parting words, one man sacrifices himself to save Oz and his companions, who have been chased into a corner. That sentiment succeeds in awakening Oz's heart, long held captive in the depths of his own soul, as though breaking all the chains that bind him... But when Oz learns of the heavy price of his revival, can his resolve withstand it?
Spoiler alert: Review contains spoilers for previous volumes and the current 21st volume.
Mochizuki really isn't giving us a break at all with this series. We keep hopping between one tragic event after another without a proper breather, but that's okay—it keeps the plot at a fast pace as it speeds towards the series' end. While this series has focused on the tragic events of Oz's life, the twenty-first book takes a deeper look at Rufus Barma, the one man whose recent actions have thrown poor Oz and Gil for a big loop.


This volume opens with a nightmare and a reminder of how Oz's latest trip into Pandora ended - Duke Barma betraying them, Xerxes and Ada and the others kidnapped, and Uncle Oscar dead. But poor Oz doesn't get a moment to rest, as a discovery of the secret tunnels of Lutwidge Academy and a box of letters between Duchess Rainsworth and the Duke have Oz readjusting his personal goals.
Meanwhile, Duke Barma, Glen Baskerville, and Vincent Nightray are traveling within Sablier while Baskerville's cronies stay camped in Pandora with their prisoners. As Barma and Baskerville play a series of head games to figure out each other's intentions, the news of Oscar's death makes ripples throughout the Pandora party. Glen has deemed the Duke too dangerous to leave alone in Pandora; what could Rufus possibly be doing to be the target of suspicion from all sides?
I love the variety of morally gray and 'duplicitous for the greater good' characters that populate the cast of Pandora Hearts, and Duke Barma is definitely one of them. So is Xerxes Break, so it's a thrill to read. the parallel narratives between them that set the tone of this volume. Everyone has their own personal machinations but Barma has no shame about going to great lengths to put them into motion, even if he's the only one who knows what is going on. And Xerxes, naturally, is caught up in the results of it, but in the best way for him and Sharon Rainsworth.
I also love the presence of Reim, who manages to keep Oz calm and collected when others can't. His unbreakable faith in Xerxes and Lady Rainsworth and the others is the buoyancy element in the group, which is currently needed more than ever. And can we just feel bad for the poor Barma pageboy who had to crawl through that dirty passageway to deliver Reim the box of letters? That could not have been fun, especially after surviving the disaster in Pandora. Get that kid a hot bath.
The art work, as usual, is spectacular. Gosh, there are so many striking panels of Duke Barma and Oz (not together, naturally). His scenes vary between the comedic and the dramatic, and the art just flows between the two different moods. Plus, I love the color art and the various chapter splash art. The cover art, depicting Noise/Echo with one arm and one leg wrapped in chains, is terrific and painfully indicative of her current situation concerning both Echo and Noise.
It won't be long before Pandora Hearts bows out for good: news reports have it ending in with its twenty-third volume. Naturally, both Oz and the Baskervilles' paths are looking to collide sooner than later in an explosive fashion, and how it ends is anyone's guess. But if Mochizuki sets the series on the course it's currently riding, everyone may not survive the final act.
Posted by Sarah at 3:45 PM