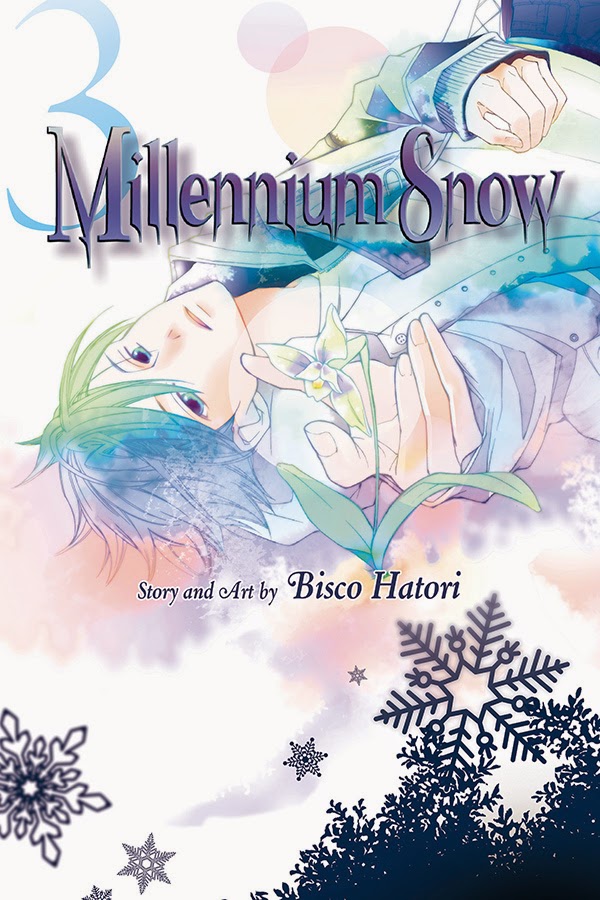 Millennium Snow volume 3
Author: Bisco Hatori
Viz Media/Shojo Beat
200 pages
Toya still can’t shake his blood aversion, even though Chiyuki would happily share hers with him, and the malnutrition is starting to take its toll. Chiyuki tries to supplement his diet with solid food, but that’s just barely enough to keep him alive. Can Chiyuki find a way to support her vampire when he refuses the help she knows he needs?
Between the second and third volumes of Millennium Snow lay years in which Bisco Hatori never inked a single page for the series. She had taken a hiatus and put her energies to another series, a little shojo manga known as Ouran High School Host Club. The Bisco Hatori that returned to Millennium Snow years later is an older, wiser, and more skilled manga-ka—and it shows on every page.
If you tired of the typical shojo comedy antics that filled the first two volumes, let the third reassure you that this series is worth following.


In the third volume of Millennium Snow, the vampire Toya still refuses to drink blood, and rebuilds his energy through the gargantuan meals that Chiyuki builds for him daily. Chiyuki is fully willing to support Toya through his blood refusal, but worries that one day, it won't be enough—and she won't be there to help. The werewolf Satsuki still crushes on Chiyuki, but it's obvious that Chiyuki only has feelings for Toya. And Yamimaru, Toya's bat servant, is as adorable as ever.
I appreciate that the series has drifted someways from the Toya/Chiyuki/Satsuki love triangle, which never did much for me. It is obvious that Toya and Chiyuki are endgame and is the couple the manga-ka is angling for, but Satsuki still tries, darn it. Instead, the series is more concerned with school life and the people who work and learn there, from the icy school nurse to a bullied bookish student. Since Chiyuki has started Toya on his “100 friends project”—which seems a bit Key The Metal Idol but okay—hopefully more humans will figure into the series as potential pals for the blood adverse young vamp.
While there is still the running main plot of Toya and Chiyuki's relationship, it is punctuated with more episodic moments, mostly school related. While earlier volumes centered around very Eurocentric mythology/fairy tales—the vampire, the werewolf, the haunted house, the familiar—this volume mentions more Japanese fare, like the cranes that live for a thousand years, the kotodama and the kotokushi. Naturally, the idea of kotodama features heavily in one of the stories, but since Hatori flags it early on, it's not much of a spoiler.
Compared to its pre-hiatus self, the third volume of Millennium Snow is more mature, a bit more mellow in mood, and takes itself much more seriously—and not in a melodramatic way, either. There is still plenty of comedy, especially when the main trio are at school or when Yami and Toya clash over silly things, but Toya's vampire-related illnesses have taken a bigger focus, as is the point that Chiyuki still relies on Toya's blood to keep her healthy. Not that it stops her from living life in a way she's been kept from for years due to being sick.
In some ways, Chiyuki's adoration of Toya is more on display than ever—she's openly gushing about how cute he is when doing mundane things, admiring how he is slowly connecting with other human beings, and has no problem letting Toya know about these things. But in other ways, she has yet to truly tell Toya how she feels, that her adoration is a shallow reading of her love for him. But since Chiyuki is the painfully patient type who keeps waiting for a perfect moment to tell him—such things don't exist, girl, I know!—she refuses to tell him the truth, making it a typical shojo love story in that regard.
I like the direction Millennium Snow is currently taking, and I am glad that Bisco Hatori is taking the time to return to her earlier series to give it a proper conclusion. A lot of fans had been wondering what the heck happened to these characters after volume two, so these new chapters are a godsend. The series ends next volume with Viz releasing the finale later this year and there are a few signs that the series is moving in the direction of ending, so perhaps the ending will bring an answer to whether or not Toya takes Chiyuki up on her offer of taking her into the vampiric fold.
Posted by Sarah at 9:11 PM