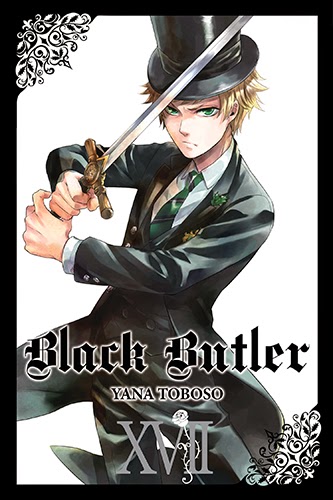 Black Butler volume 17
Author: Yana Toboso
Yen Press
176 pages
Following the outcome of the annual cricket tourney and due in no small part to Sebastian, his uncommon butler, Earl Ciel Phantomhive finally has earned a seat at the Midnight Tea Party hosted by Weston's enigmatic headmaster. As moon-pale petals bloom on the lapels of the students who have been granted a place at his table, the man who holds all authority at the college reveals himself to his guests. Will his appearance shed light on the fate of the missing students or conceal the path to the truth in yet more darkness?
Don't be fooled by the official synopsis. A good chunk of this volume—about half of it, really—is dedicated to the end of the cricket tourney. It's a ridiculous, farcical take on the English sport but it's so darn Kuroshitsuji I can forgive it. The whole book is very Yana Toboso, from the elaborate outfits to the unexpected plot twists and the cameos from favorite characters, and it pushes us through into the final act of the Weston College mystery arc.


Between the high octane cricket, Sebastian chase of the headmaster, and the Midnight Tea Party, it's an eventful volume and an engaging read but it doesn't come together as well as previous books. If you don't get cricket (and most American readers don't) than the cricket tournament scenes won't make much sense. If you want definite answers to what the heck is going on at Weston, the last chapter is only going to raise more questions.
The cricket match itself is pretty ridiculous. We have Agni on the sidelines, distracting players with his female harem's bare legs and lack of clothing. We have certain players striking poses and wielding their bats and balls like they're legendary English heroes in sports gear. And then there's Ciel, quietly pulling the strings of both sides so he can win a cricket match. Meanwhile, Sebastian is running around campus looking for the headmaster, but with little luck.
Good thinf for Ciel and Sebastian that the Blue House aka Sapphire Owl aka the loser house of Weston wins the cricket challenge, thus granting young Phantomhive access to the Midnight Tea Party. Although it should have been expected, since the only way Ciel would ever find out the truth about the missing students would be by confronting the council and meeting the headmaster in person.
Naturally, the revelation of the headmaster's identity is the biggest plot twist of the whole volume, but you have to wait until the very end to see the truth. But it is pretty much worth the suspense. I sincerely doubt that most readers saw this one coming. I certainly didn't. Toboso did a pretty darn good job keeping this particular plot point under wraps until the last second.
Speaking of Toboso, her artwork in this volume is on point. I love how she brings the cricket scenes to life, making the movements really flow on the page. She keeps the action nice and exaggerated, adding to the oddball mood of the match. Plus, as usual, her costumes and her color art is brimming with delicious details. It's no wonder so many people cosplay Ciel's costumes; his outfits are the best and are the most intricate in the series.
A lot of plot-related things are coming together, from the fate of the missing students to the revelation of the Weston College headmaster. It looks like Ciel and Sebastian are going to fight for their lives if they want to make it off campus alive. This book was a lot of cricket madness and 'chessboard' arrangement of characters and plot devices, and I didn't love it as much as I have before. But based on the last chapter's dark turns, I have high hopes for how volume eighteen will turn out.
Posted by Sarah at 7:14 PM