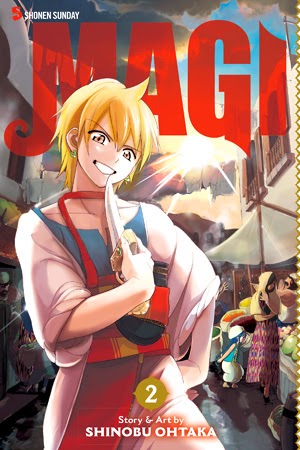 Magi: The Labyrinth of Magic volume 2
Author: Shinobu Ohtaka
Viz Media/Shonen Sunday
192 pages
Aladdin and Alibaba have entered the Dungeon of Qishan hoping to find hidden treasure—but danger's found them! A horde of slimes closes in on them, while Lord Jamil and his slaves head into the dungeon looking to intercept Aladdin and grab any riches he may have found! But these rivals have more to worry about than each other, and new friends, new enemies and amazing riches are yet to be discovered!
Some spoilers for the Magi series so far are in this following review.
I did not love Magi's premiere volume. I found a lot of it really obnoxious and annoying and I wondered what the point of this series would be. But, for some reason, I vowed to continue reading it. Its second volume didn't blow me away, but it entertained me in a way the first book never did, and the last chapter has me actually looking forward to the next part of the story of Alibaba and Aladdin.


Most of this volume takes place in the Dungeon of Qishan, where Alibaba and Aladdin are set against Jamil and Morgiana to find the dungeon's treasure and become its victorious conquerer. But the secrets of Qishan's dungeon lie further than either Alibaba or Aladdin could ever imagine, and what they find in the underground reshapes how Aladdin is seen. Totally innocent little kid with a magic flute? As if.
We also learn more about Alibaba, who isn't the down on his luck treasure hunter I thought he was. His fighting style against Jamil reveals that he didn't learn his skill set in the slums of Balbadd but from palace life—and not as a slave. It added more dimension to his character, but the way it was told—through a flashback crammed into a fight scene—was a clumsy way to introduce Alibaba's personal history.
There is also more of Morgiana, who becomes more interesting and developed with each volume. We learn where she came from, how she came to be in Jamil's service, and the kind of woman she is. There's a bit of that annoying "innocent naive boy teaches jaded slave how to be free" but it doesn't overtake her entire narrative. I prefer the relationship between Morigana and Alibaba, as they've spent their lives in palaces, albeit while in vastly different positions, and have seen both sides of that gilded coin. I hope they end up traveling together in the next book.
The artwork is definitely better in this volume. It's a lot cleaner and crisper, and there's less obnoxious textures and sketchiness. It also helps that the majority of the volume is action, which Ohtaka tends to draw with a clear flowing style that is easy to follow. There are still the humorous caricature moments between Aladdin and Alibaba that I found amusing the first time, and a lot more 'faces stricken with terror' that luckily don't look like they were plucked out of a volume of Attack On Titan.
I'm still not in love with Magi, but I know it's going to be a slow process. I can see characters developing into people I can actually care about, like Morgiana and Alibaba, and the world-building is really growing as well. I want to see more dungeons, more countries and cultures, and I want to see how Aladinn and his djinn in a flute are going to rise to the occasion of their surprising mystical pedigree. It's not the greatest thing to come out of Shonen Sunday, but it's managed to entertain so far, and that's good enough to push readers into volume three.
Posted by Sarah at 6:23 PM