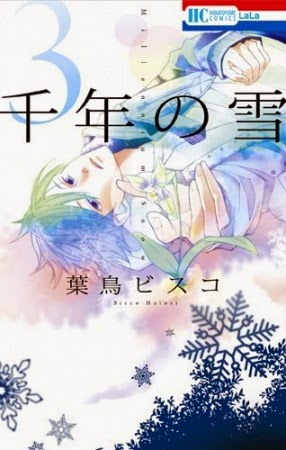 I don't usually comment on books I'm still reading, but I felt like I could comment a bit on Millennium Snow's third book before the end of it. I'll have a full review of the book up either tomorrow or Saturday.

The remarkable thing about the third volume of Millennium Snow by Bisco Hatori is that the manga-ka started it up again after a long, multi-year hiatus.

During this hiatus, of course, Hatori started up and finished a whole 'nother series: Ouran High School Host Club. Not a small series by any definition, and it quickly became her defining series. When she eventually came back to Chiyuki and Toya, one can imagine the set of fresh eyes and new perspectives she brought to the page.

Right now, the difference between the last couple of chapters in book two and the opening chapter of book three, pre-hiatus and post-hiatus, are like night and day. The art has improved, there is less squawking and contrived drama, and Toya and Chiyuki seem more mature in their interactions with each other. There is a significant shift from supernatural rom-com to supernatural drama, although still with rom-com elements.

It's kind of amazing to see this kind of change in a manga-ka's storytelling and art style between series. It seems that recently, many popular manga-ka get locked into long-running series and we don't often see how they skills shift and mature between different titles. But Hatori was not only able to bring Ouran to its own deserved end but got to return to Millennium Snow to give it a proper conclusion (volume three is not that conclusion, though!) and now readers get to see the new Hatori in her old stomping grounds, and that's something both long-term fans and new fans can appreciate.
Posted by Sarah at 9:11 PM