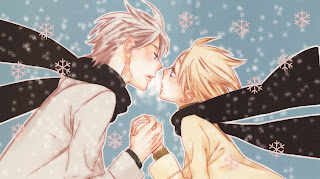 Hello, my name is Sarah and I am a rotten girl! My first exposure to yaoi/BL fandom was through fanfiction, specfically slash fanfiction (thank you, Fanfiction.net!). My first fandoms in which I read M/M relationships were Zoids, Gundam Wing, and Dragonball Z - naturally, all anime with male-dominated series. Of course, shonen series proved to be a perfect place to explore male/male relationships through fanfiction.

The first yaoi manga I read was a scanlation of either a Youka Nitta or a Kazuma Kodaka manga, hosted on a now-defunct scanlation website. And it was dirty. And I don't think I was old enough to read those kinds of things yet! (Ssh, I'm 23 now, it's okaaaay!) The first yaoi manga I ever bought with my own money was But I'm Your Teacher! by Row Takakura, a Media Blasters title which is sadly now out of print. I've bought my fair amount of yaoi manga over the years, but when your mum has three bookcases worth of yaoi books, one's collection seems sparse in comparison!

I was a staff member at the Midwest's first yaoi convention, Bishiecon, and was even interviewed by the Riverfront Times during Bishiecon's first year. We went strong for several years and I made some great friends there as well as memories that I will never forget. In other words, yaoi has been a part of my life for years. I am, and always will be, a rotten girl. That is just a part of who I am!

When I started Nagareboshi Reviews years ago, I decided off the bat that one of the main tenets of the blog would be yaoi/boys' love - not so much as to overwhelm the blog but enough that readers know a fujoshi is behind the wheel.

Thus I began the weekly (which turned biweekly) feature Fujoshi O'Clock as well as my reviewing of yaoi-related materials. Fujoshi O'Clock has always been one of my favorite features to update - even when I dropped AMV Of The Week, the fujoshi feature stuck around. I can only hope y'all have been enjoying it as much as I have! 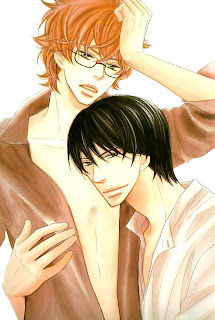 Below are all of my yaoi reviews as of today (not including my recent Artifice review cos that isn't strictly yaoi):

Surprisingly enough, this list only reflects a fraction of the yaoi manga I've read so far. Don't worry: I plan on reviewing more in the near future! Please feel free to leave me some recommendations of BL/yaoi manga you've read that you think I should read, as long as it is readily available in English.

I hope that my dear readers enjoy the yaoi aspect of Nagareboshi Reviews. It's definitely been a niche aspect of manga culture, but with new BL-related publishers like SuBLime popping up and more yaoi works being licensed all the time, the power of yaoi cannot be denied. The future of the fujoshi is very bright!