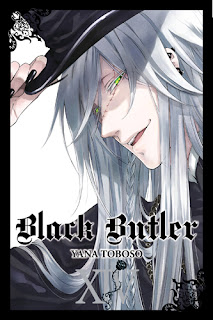 Black Butler volume 14
Yana Toboso
Yen Press
192 pages
The veil of mystery cast over the Aurora Society’s “absolute salvation” is torn away, and the true mastermind behind the scheme steps forward at long last. In the ensuing battle, Earl Ciel Phantomhive looks on in horror as Sebastian, his infallible manservant, is struck down by the death scythe of an unforeseen combatant. Devil though he may be, even Sebastian is not immune to the blade of a reaper’s scythe. As Sebastian’s cinematic record spills forth, the tale of how a devil became a butler to a little lost lord flickers to life in shades of sepia, blood, and ash… (Source: Goodreads)
Spoiler warning: Review contains spoilers for the Black Butler/Kuroshitsuji series so far. Read on with caution!
The best part of Black Butler's fourteenth volume is not the main story. Let's be real for a moment. We all know this boat is going down and everybody is dying like Yana Toboso is reenacting the Red Wedding on the water. No, for me, what makes this volume stand out from the others is our trip down memory lane through Sebastian's cinematic record, invoked thanks to a certain shinigami's scythe. It is seeing how Sebastian and Ciel became what we know them as: the Earl of Phantomhive and 'one hell of a butler'. It's an origin story that has been books and books in the making and now it is finally here and it is great. 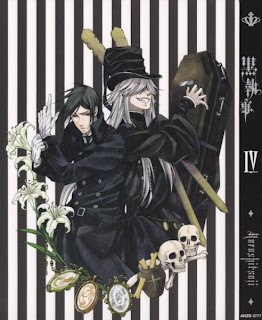 First of all, let's get the big reveal of the previous volume out of the way. Our beloved kooky Undertaker is a shinigami, much like Grell and William and Ronald. In retrospect, is there any surprise behind that reveal? The Undertaker, much like any shinigami, lives and revels in the world of death. It is his job and his world, both among normal folk and his own kind, those that reap souls every day. I'm more surprised that we get to see his eyes! I'm also surprised they did not turn out to be big gaping holes in some kind of weird Night Vale-esque horror twist, but I guess Toboso wasn't going for the Stephen King effect with Undertaker's face.


I have to admit though, despite grabbing the spotlight in the previous volume, our jolly crew of shinigami don't do much in this volume. Okay, they do but they don't dominate the narrative like they once did. So when they do act, it's rather on the periphery on my interest. Yes, yes, Ronald, I see your wee lawnmower in action! Move out of the way, you're blocking my line of vision - let me see Sebastian (yes, I'm afraid I'm one of those rotten girls who think Sebastian Michaelis is an absolutely stunning bit of ink on the page)!
The stars of this series are the stars of this volume, after volumes of being ousted from attention by characters like the Undertaker and Lizzie and Grell. These stars are Ciel and Sebastian, and they continue to prove why this manga is called Kuroshitsuji and not Kuroshinigami. Ciel's story of vengeance is compelling enough, but when you add in Sebastian and their Faustian pact, it becomes a must-read for anyone who likes their Victorian horror manga with an added dark, bloody edge. 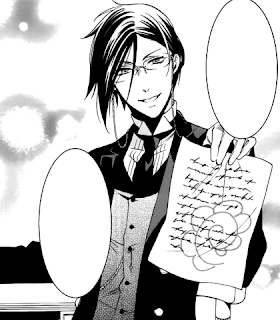 As readers, we learn so much about the relationship between Ciel and Sebastian in this volume's opening. We see Sebastian learn to become Ciel's butler. We see Sebastian gain the trust of a young boy who is still dealing with the scars of losing his family and the abuse that followed, the abuse that he was saved from only by the assistance of a handsome demon who happened to step into his life. These two people, who are now forever tied to each other, one soul chained to the other - it is their story that we are finally looking deep into to see the truest forms of Sebastian Michaelis and Ciel Phantomhive.
Speaking of Ciel, Toboso clearly had fun drawing his various outfits in this volume. The costumes and clothes in this book are truly stunning! I can see a lot of potential Ciel Phantomhive cosplay just in this one book, although it would take a whole lot of skill for the costumer. Toboso's art style has always been this beautiful, detailed style that embodied a dark Gothic style, and in this volume, that certainly comes out more than ever. Also, can we get a full color Black Butler art book some time soon? Pretty please, Yen Press? It would be ace!


Don't worry; if you're bored by the Aurora Society story line, it ends in this volume. The rest of the book includes an Easter celebration one-shot and the start of a new story arc in which Ciel is apparently investigating a boys' school where snobs rule supreme and the Sapphire Owl House's housemaster is super sexy. It looks to be an exciting story to read, definitely more friendly and less zombie-filled than the last one, and seeing Ciel in a school uniform makes one wonder how he would have grown up if his family hadn't been massacred - but that's a point for another post... Still, Black Butler continues to be an entertaining, thrilling series. Now it's time to see what else this manga can do.
You can read about future volumes of Black Butler at the series' page at Yen Press' website.
Posted by Sarah at 8:00 PM