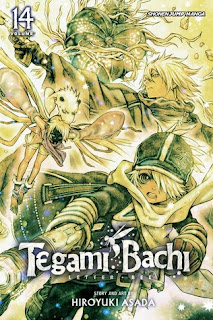 Tegami Bachi volume 14
Author: Hiroyuki Asada
Viz Media
192 pages
Spoiler warning: Review contains spoilers for the Tegami Bachi series so far. Read on with caution!
As Bees and ex-Bees alike gather in Yuusari, the rampage of the unstoppable Gaichuu Cabernet continues—and heart attacks only seem to make it more powerful. As it absorbs the attacks, Cabernet keeps morphing into stranger and more sinister forms. Meanwhile, a tragic accident triggers a different kind of transformation in Niche… (Source: Goodreads)
Perhaps it's a bit of exaggeration on my part to say that this is the volume of Tegami Bachi in which everything changes. Okay, not everything changes but this is indeed a book in which some very important characters go through some irreversible changes that will decide the further direction of this series. After taking a bit of a back seat to the bigger drama in Amberground, Lag and Niche are once again at the heart of the action - and it's their own hearts that are in question as Tegami Bachi rolls through its fourteenth installment.


First of all, this is the volume the Cabernet arc ends, thank goodness. Not because it's a terrible arc (cos it's not by any stretch of the imagination) but because it's been going on for so long. And to be honest, Tegami Bachi does not do its best with long story arcs like Cabernet's where the main conflict is a big battle, like something out of Bleach. The conclusion to the Cabernet arc takes up a majority of this volume, and stirs up some very interesting issues as it does. So if you like action with a point, this book is for you. Everyone has their shindans out and firing!
(Actually, the more I think about it, the more this Cabernet arc reminds me of something out of D.Gray-Man - a manga which is pretty good at incorporating larger story themes into briefer, flashier arcs with Big Bads. Now then, comparisons between Allen Walker and Lag Seeing can wait for another time...) 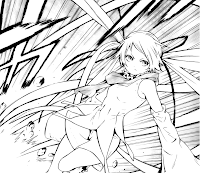 For me, the highlights of this volume were character transformations, some more literal than others. The flashiest is exclusively owned by Niche, who for a brief moment turns into someone who can protect Lag better than ever before. She matures physically, her attacks becoming their strongest since the series began, but this Child of Maka's heart does not follow suit. It's a transformation her big sister has also gone through, but for Niche, this one isn't permanent. Perhaps her heart needs a bigger shift for the transformation to be complete? Or maybe Hiroyuki Asada just has too much fun drawing Niche as a kid. She definitely stays relatable to Lag as long as she stays small, although it has a direct impact on her Dingo battle strength.
Niche was a shining star, but she wasn't the only one. It feels like all the Letter Bees, current and past, who got into the action also got a chance to shine. I really adored Connor's role in defeating Cabernet. He uses his hunger as a strength, not a weakness, and his bodily heft is used to his advantage. For a character who previously has been the comic relief because of his body type, it's great to see Connor become the hero during a time of distress for Amberground's residents. 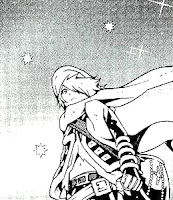 Also, it feels like there is an unwritten code among Letter Bees, the kind of code that spurs Garrard and Valentine to return to service. Once a Letter Bee, always a Letter Bee. No wonder that when LBs turn against Amberground, it feels like a very personal affront to them all. To most of them, it is more than a job; it's their lives. The Letter Bees have become a real family due to shared experiences. Whether or not the corruption that Largo Lloyd found will fracture this handmade family remains to be seen.
I loved Lag Seeing in this volume. He is growing up and realizing that if he wants to make sense of this situation - of Reverse and Noir and Gauche - he has to ask some painful questions and reveal some painful memories. Lag still has to realize that he can't protect everyone when his own life is in danger.
His crawling to go after Niche (who has been tasked with carving out Cabernet's heart) while he's still injured and bleeding is incredibly dangerous and so very Lag, putting his own well-being at risk to help his loved ones. If it weren't for Noir being close by, there's no way Lag would have made it by himself (although I'd like to think Doctor Thunderland Jr would have put a stop to that anyway). 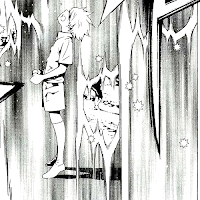 We also see into Noir's heart through the power of the shindan and also the message he has been unknowingly holding for Lag the entire time. As Lag journeys into the heart of Noir, he realizes that things aren't what they seem and that in order to understand, he will have to return to his own home town for answers.
It's also heavily hinted that Gauche - or what is left of Gauche - is still sleeping inside of Noir's body. Will Lag be the one to bring back Gauche, or will he end up being lost forever? Now that Noir has apparently become a free agent, he will probably become a target of Reverse.


Now that Cabernet has been defeated and Lag Seeing (with Niche, of course) has started off on his own personal journey to find answers, Tegami Bachi as a series will have to take a new direction, separate from the Cabernet arc it had been tackling for several volumes. I'm looking forward to see how this braver and slightly more mature Lag will tackle the secrets of Amberground - and what machinations Reverse will put into play to send Amberground into chaos.
Posted by Sarah at 6:58 PM