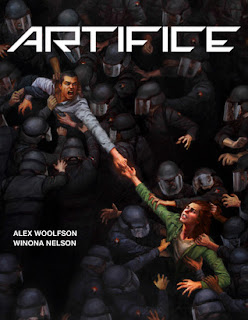 Artifice
Author: Alex Woolfson
Artist: Winona Nelson
AMW Comics
112 pages
Artifice is about Deacon, a prototype android soldier so advanced he is referred to as an "artificial person." On one of his first missions, Deacon was ordered by his corporate masters to eliminate a team of scientists who knew too much—and he has failed spectacularly. Not only did he let one of the targets live, he attacked the team sent to retrieve him. Now the Corporation wants answers and they bring in the brilliant robopsychologist Dr. Clarice Maven to get them—giving her the power to make sure Deacon never fails the Corporation ever again. (Source: Goodreads)
Once upon a time, Alex Woolfson had a dream. And that dream was to make a kick-ass science-fiction story about LGBT folk that could entertain everyone it came across. Okay, maybe not in those exact words, but that is what happened when he and Winona Nelson came together to create the web comic Artifice. I've been blogging about Artifice since I first stumbled across the Yaoi 911 website and not only have I become a big Woolfson fan, I even helped fund his Kickstarter to put Artifice into print. Naturally, for the 801 MMF, I had to represent Artifice somehow, thus this article ("Oh, but Sarah, it's not technically manga!" To which I say: meh!).
So now that one of the best English language BL web comics can be held in my hot little hands without a computer to do so, does the print live up to the hype? Were all the stretch goals and fundraising worth the final product? And most importantly, do Deacon and Jeff get their happy ending after all?


I can't answer the last question - spoilers, sweetie! - but I can definitely say that the print version of Artifice was well worth the wait and the money put into it. This graphic novel is a clear labor of love, from the striking color to the quality of the pages and all the extra odds and ends for fans that have been included after the end of the story. It's a very professional looking production; I'm sure his next graphic novel, The Young Protectors (already fully funded thanks to Kickstarter!) will look just as good.
As for the main story itself, the unlikely romance of artificial soldier Deacon and young outcast Jeff, it is still a shining well-written example of M/M sci-fi with a punch. Yes, you can still read Artifice online for free, but some pages just work better on the page, especially the two page spreads. Plus, you don't need an Internet connection to read this book! The book itself is about the same size as my netbook's screen, if not a little bit bigger, so image quality is definitely not lost in translation.
Rereading the main story of Artifice, I loved it just as much as when I was reading the online weekly serialized version. Woolfson has created a fascinating set of characters in a world where artificial men are poised to replace humans in hard labor and homosexuality is a clearly marked gene. Unfortunately, it's also a world where homophobia and bigotry still exists, thus the reason why Deacon and Jeff feel like outcasts - and why the two of them connect so strongly, knowing all too well the sensation of being left out of society and treated like so much human refuse.
Winona Nelson, the artist behind Artifice, has taken Woolfson's scripts and brought them to life. Her art is incredible and filled with vitality. Plus, after reading about the processes she goes through for each page, I appreciate more than ever the work she puts into this book. I especially love the way she draws Deacon, illustrating him perfectly as someone who is not human but has a very human defect called emotions, the kind of guy who can flip between smirking playfully and punching a hole in a dude's chest as easily as one turns on a light.
Yes, Artifice is a violent comic. I'd be foolish not to mention that. After all, our first image of Da Vinci Four is a cafeteria completely overturned, tables on their sides with bullet holes, bloodied bodies draped over chairs. Deacon is not a gentle person when provoked - and he does get provoked. Even Maven gets confrontational, although certainly not to the same extent (although amazingly enough, her anger's intensity can scare Deacon - and the reader - at moments). Yes, it's kind of a love story, but it's a love story with guns and blood.
But it's good. It is so very, very good. The story of Jeff and Deacon is one I plan on revisiting before too long. The world-building is so interesting, I wouldn't be against an Artifice 2 after The Young Protectors finishes its run or goes on break. And the print version has so many excellent extras, like seeing how Artifice was made to responses from the NoNeCo 'bot', that any fan of the comic would not do wrong to buy a copy.
If you don't think there's any good LGBT-friendly science-fiction web comics out there, feel free to have Artifice prove you wrong. Go to your local comic book store and pick up a copy of Woolfson and Nelson's collaboratory graphic novel for yourself. Anyone who enjoys a solid story, lots of action and drama, and a bit of existential angst from a handsome artificial human will certainly find enough to enjoy in the pages of Artifice.


You can read Artifice online at the Yaoi 911 page. Currently, Alex Woolfson is writing The Young Protectors, a gay superhero webcomic. Winona Nelson's latest web comic is Casseopeia.
Posted by Sarah at 1:26 PM