In my last 801 MMF post, I think I made it rather clear that I've been a rotten girl - a fujoshi - for quite some time. Therefore, I've read quite a lot of yaoi/BL manga!

Let me tell you, it hasn't been easy reading so much. The fact that there is so much yaoi manga out there actually makes it harder to pick out something to read. I don't just read anything. I try to read works that interest me, that have a unique aesthetic, or at the very least have a fascinating story. But I do have favorites, and I'd readily recommend them to any of my fellow rotten folks looking for something new to read.

Below are some of my favorite boys' love manga . . . at the moment. My favorites are subject to change at any time! I kept my list to works readily available in English, since I know most of my readers are English readers and buy their manga in said language. Support the industry; buy more BL (the smuttier the better)! 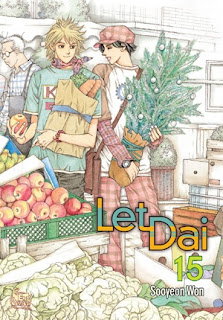 Let Dai by Soo-yeon Won. Okay, it's a manwha, but it still counts! It is a very mature, violent love story between a a juvenile delinquent, Dai, and a boy who happens to cross his path one day, Jaehee. As Dai and Jaehee find themselves attracted more and more to each other, Jaehee discovers the true self that lies beneath Dai's hard outer persona, even as the rest of their world threatens to tear them apart. It is fifteen volumes of emotional brutality that will shake you in the best way possible.

Let Dai is available via NetComics!

Midare Somenishi/Samurai Love by Kazuma Kodaka. First of all, this is hardcore yaoi. Not for the faint of heart! But this historical manga set around a group of bandits who kidnap the main character and his brother and force him into becoming their sex slave is, I kid you not, one of the first yaoi I ever read. For a book that is full of explicit sex, it also has a sublime story of a man struggling to protect his brother and what people will do for the ones they love.

Note: Midare Somenishi was published by Be Beautiful and is sadly out of print. But it's definitely worth hunting down! 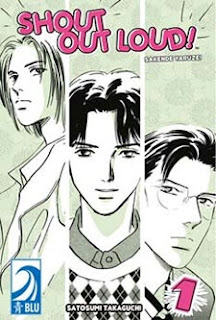 Shout Out Loud! by Satosumi Takaguchi. Tokyopop's yaoi imprint, when it was still around, had a lot of great titles under its belt. Shout Out Loud! aka Sakende Yaruze was one of them. It's a wonderful story of a voice actor named Hisae who has to juggle the sudden appearance of his teenage son with his job as voicing characters in BL radio shows. Naturally, the boys' love doesn't stay in the recording booth as Hisae finds himself possibly falling for one of his colleagues! It's funny, it's sweet, it's sexy - at five books, it's perfect.

Shout Out Loud! was published by BLU Manga but can be found at a reasonable price online despite being OOP.

Age Called Blue/Seduce Me After The Show by est em. I think est em is one of the best BL manga-ka out there, no argument. She is an author who, if she has a new work available in English, it becomes an auto-buy for me. This set of books, connected because of shared characters, are a testament to her skill at creating entire worlds and moods within the confines of a short story. Her art, which its use of detail and white space, is absolutely gorgeous. Honestly, I'd suggest anything by est em as something worth reading. She's yet to go wrong by me! 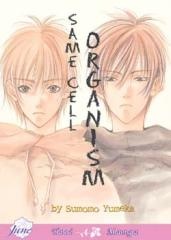 Same Cell Organism by Sumomo Yumeka. I'm pretty sure if you were to stack up all the yaoi manga Digital Manga Publishing has released since its inception, you'd have a mountain of a stack. One of the DMP titles that have really impressed me is Same Cell Organism, a collection of short stories - hey, I really like BL one-shots, okay? But what Sumomo does so well is exploring characters, bringing out their true selves in a short amount of time. Even though I don't spend entire series with her characters, I feel like I really get to know them and enjoy them - and that is quite a feat.

Buying the physical copy of this might not be economically feasible. I'd suggest buying the electronic/Kindle version instead!

Flutter by Momoko Tenzen. I just reviewed this one earlier this year, I know, but gosh it was amazing. It's one of those books I'm so very glad I own because I can see myself rereading it multiple times. Watching these two men who are also colleagues fall in love with each other was just . . . guh. I love me some work romance and Flutter delivered and then some. The art, the storytelling, the paneling, the pure emotion behind this manga left me wanting more. I've become quite a big fan of Momoko Tenzen because of works like this one.

Flutter is another Digital Manga title, albeit one still in print.

I could go on but I won't. It's too much! I could easily list a few more BL manga that have romanced me completely. Please, share your own favorite yaoi/BL manga titles with me!
Posted by Sarah at 7:05 PM