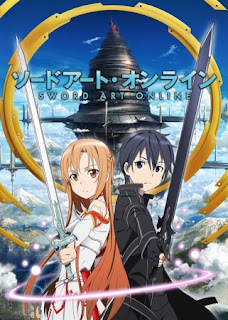 I've been watching the Toonami broadcast of Sword Art Online and - well, a more thought out post will come soon, but let me say I'm actually quite impressed with the first three episodes. I know, however, that things apparently get worse eventually. I've heard the series be compared to a trainwreck, which never bodes well for any anime. But I'll keep watching it, especially since it takes place in the same universe as Accel World, which was one of my favorite anime last year. And for some reason, I like Kirito! (And please, no spoilers!)

Below are some of the latest news connected to the Sword Art Online anime. I wonder if there will be a second season?

An extra edition of SAO will air in Japan on December 31st. It will summarize the series and also include some new footage exclusive to the extra edition. According to Aniplex, this latest episode will be Japan-only (unless Aniplex changes its mind and releases it digitally between then and later in 2014).

Aniplex USA, speaking of, has stopped shipping the first DVD set of Sword Art Online. This is due to issues in the duplication process, which ended with some discs having incorrect content on them. For those who own these discs, Aniplex is working to make sure they get replacement discs with the correct material.

Extra note: The anime has been licensed by Aniplex. The various manga versions and the light novels seem to have gone unlicensed for now. Anyone? Vertical? Viz? Seven Seas? If Attack On Titan can explode across the North American otaku scene as much as it has, I don't see why Sword Art Online can't do the same!
Posted by Sarah at 5:41 PM