A Crime Within The Walls: Sword Art Online 5 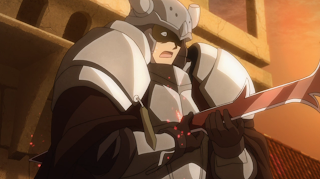 A player has been killed inside the safe zone and not by the known means. Asuna and Kirito take it upon themselves to find out how and why this is happening. (Source: Crunchyroll)
Spoiler warning: Review contains spoilers for the first five episodes of Sword Art Online. Please, no spoilers beyond the Toonami broadcast!
Let's just call this fifth episode of Sword Art Online for what it is: the one in which Kirito is immensely clueless, and Asuna is not that better off. "Why do you say that, Sarah?" cry SAO stans across the country. Gosh, could it be because Kirito makes a series of decisions that make no sense and end in tragedy and stupidity for everyone involved? Yeah, I'll say that's it. And Asuna gladly tags along for the ride down the rabbit hole. Apparently, player killers make everyone lose their mind in one way or another.


So, in "A Crime Within The Walls", Kirito crosses path with Asuna, who has become a great player and expert level clearer during their separation. This surprises Kirito - although to be honest, the fact that she's still alive should have been a clue that Asuna has got skills. Is it really that much of a shock that Asuna would end up joining the main battle to reach the top floor? Plus, she's in the opening sequence and by anime law that means she is important! (SHUT UP ATTACK ON TITAN, YOU CHEAT.) 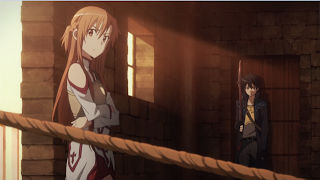 Their guild's efforts to work through the next level is temporarily foiled when a player killer strikes in the one place PKs shouldn't be allowed to thrive: a town, a 'safe zone' against such deaths. Player Kains has been killed, struck through with a player's weapon and left to hang by the neck for all to see. As Kirito and Asuna investigate, they meet Kains' friend Yoruko, and learn the story of how their guild, the Golden Apple, disintegrated and how one player called Grimlock could be behind the death of Kains.
There's something absolutely malicious about the idea of player killers in Aincrad. This isn't like a normal MMORPG where player killers are more a nuisance than an actual threat. These player killers are literal killers of players; PKs must be either real life sociopaths or uncaring to the fact that the avatar that crush with their weapon represents a real person beyond the SAO sphere that dies along with their character. What kind of person would take out another player? Perhaps it is because for many of them, Sword Art Online has become their world - and in the real world, you fight to survive. You fight, and on occasion, you kill. 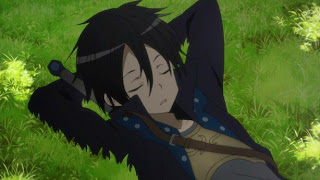 Think back to the beginning of the episode. Kirito, although working to clear all the levels and get the hell out of the game, revels in the perfect weather that occurs on the 56th floor. This is all much to the annoyance of Asuna, who really wishes he would spend more time training and fighting than lying in the grass. But it's a wholly immersive virtual reality game and this world feels as real as anything else outside it, so can we blame Kirito for enjoying the gentle breeze and the feel of the fresh grass? Can we blame any player for living in this virtual world for so long that it feels more real than reality?
Having said that, the fact that some players resort to taking the lives of their fellow players speaks more about their personality than how the world of Aincard works.
Speaking of Aincard becoming the real world for players, I find it interesting that Grimlock has an in-game wife, who happens to be the Golden Apple's leader, Griselda. Aww, even their handles partially match! I can definitely see people joining in relationships, brought together by the constant threat of death and the need of companionship beyond what a guild can do. It begs the question of whether players can have sexual intercourse, but something tells me the SAO show doesn't care to answer that question in any way. 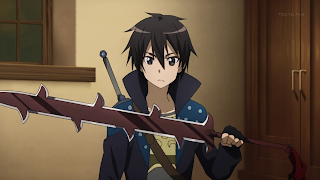 So Kirito and Asuna take it upon themselves to investigate the death of Kains, playing detective when most would have walked away and continued powering through levels. As detectives, they aren't half-bad; they have the resources and the connections to discover the origin of the murder weapon (Guilty Thorn ain't a terrible weapon name, considering the aesthetic) and are able to recover the other member of Golden Apple who is essential to finding the truth. I would give them a B- for their detective work. And yet, on the most important matters - on the safety of Yoruko - Asuna and Kirito get an F.
It is obvious from the get go that Yoruko is involved in the death of Kains. It is painfully clear that she knows things, that her connection to Kains goes much deeper than it looks. And it is exceptionally explicit that if Kains has been mysteriously killed by some player killer that Yoruko is a very possible target of this PK. So what do Kirito and Asuna do? Leave her alone for long periods of time, don't protect her doing vulnerable moments, and doesn't even offer to have the girl travel with them for added protection on the road. Guess what happens to Yoruko? It is a real face palm moment.


So we end Sword Art Online's fifth episode with Yoruko dead and lying in the street, Kains still dead, Grimlock still on the run from retribution, and Kirito, Asuna, and Schmit standing around like schmucks. Look, another death for Kirito to feel responsible for! Only this time, he really does deserve this bit of angst. Seriously - if someone is trying to kill your associate, keep them away from open windows. We've all learned a lesson today and it's don't think like Kirito. Think like Silica: she had the common sense not to be involved in this arc!
Posted by Sarah at 6:02 PM