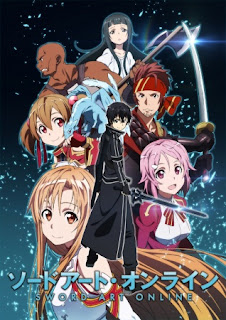 In the near future, a Virtual Reality Massive Multiplayer Online Role-Playing Game (VRMMORPG) called Sword Art Online has been released where players control their avatars with their bodies using a piece of technology called Nerve Gear. One day, players discover they cannot log out, as the game creator is holding them captive unless they reach the 100th floor of the game's tower and defeat the final boss. However, if they die in the game, they die in real life. Their struggle for survival starts now... (Source: Crunchyroll)
Spoiler alert: Post contains spoilers for the first four episodes of Sword Art Online. Please do not share spoilers for episodes beyond this point!
When Toonami announced that their latest addition to their line-up of anime was Sword Art Online, I was pleasantly surprised. SAO is a title I had been meaning to look into since it initially aired last year, simulcast on Crunchyroll as it aired in Japan. Although I've heard that Sword Art Online's second cour is a veritable train wreck, what I've seen so far of it's first cour has been rather impressive. Considering it shares the same 'verse as personal favorite Accel World, it's gotta be good to impress me - and it is.


SAO is one part Accel World, one part Dot Hack franchise, one part Final Fantasy with a touch of the Matrix films. And yet, Sword Art Online manages to rise above the series it steals its better known elements from. It's a little bit scary and a little bit exciting, but it's definitely one of those series, like Attack on Titan and Puella Magi Madoka Magica, that I'd rather be a distant observer of, never an actual cast member. If I ever want to get lost in a virtual reality-based MMORPG, I'll just wait for the real life equivalent of Hack's The World, thank you very much. The World doesn't try to kill you from the get go! 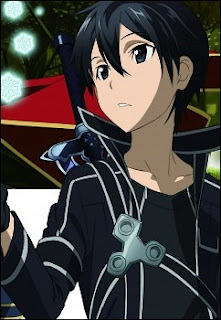 Yes, I realize that Kirito's cry of "if you die in the game, you die in the real life!" is a little cliche and rather obvious after the game creator's dramatic entrance and speech. But sometimes, you have to point out the obvious because it's so damn hard to take. After all, ten thousand game enthusiasts didn't expect to be permanently logged into their Nerve Gear, forced to grind and level up for their very lives.
And by the end of the first month, two thousand people have already lost their lives - and the first level has yet to be cleared. Two thousand people. When that statistic appeared on my screen at the end of the first episode, I shuddered. Don't take this game lightly, it seemed to say. Or you'll pay for it.
Luckily, our protagonist that we are following through the harrowing adventures of SAO is Kirito, and he has a great advantage over other players: he was one of the few beta testers of the game, so he knows how it works to a point and doesn't have to run around in a frenzy trying to level up without a strategy. This really becomes obvious as soon as the trapped players are released to try and reach the top level: he tells his first companion, Klein, not to stay in their current town but to reach the next town over, because all their quests and resources won't be depleted as quickly by newbies desperate to gain experience. Kirito knows how this 'verse works; it won't play him that easily.
Of course, Kirito is ridiculously nice, especially in a game where being nice doesn't get you anywhere. He spends his first day in SAO helping Klein get a handle of the battle system, in the process showing the audience how the game works. He also spends a lot of his time helping lower-level players survive, even though realistically he could be powering through the levels by himself. He wants to be a lone wolf but damn, he sucks at it. He keeps glomping onto other people! 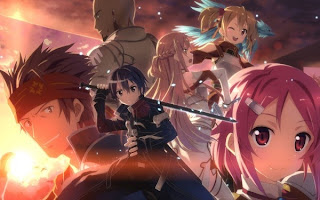 By the fourth episode, he has a reputation as "The Black Swordsman" thanks to his weapon of choice and his signature coat. His level is so high, it actually benefits him to keep it hidden that flaunt it. And yet, despite his lone wolf status, Kirito ends up in the company of others quite often - the Moonlit Black Cats guild, Asuna, Sachi, Silica.
It's his time with the Black Cats that has spurred his 'save everyone' complex, since they stepped into a trap and Kirito was the only survivor, thus blaming himself for not being able to save them and taking it upon himself to make sure it never happens again.


We have a few things starting to form against the main narrative of Sword Art Online, like the characters of Asuna and Silica who seem more important than their brief appearances make them out to be, and the fact that as a Beta tester and high-level swordsman, Kirito might be the only one who currently has the best chance of reaching the top level and making it out alive.
Plus, where has the game creator gone? Is he waiting on the top floor or has he masqueraded himself among the other players? And does he intend on wrecking more havoc upon the trapped SAO players to make it that much harder to beat the game? So many questions, and at episode four, so few answers.
Posted by Sarah at 7:30 PM