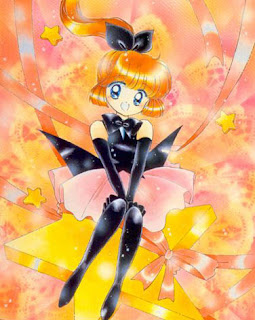 What is License Line? Put simply, it's a semi-regular feature on Nagareboshi Reviews in which yours truly posts about a certain anime/manga series that truly, desperately needs to be licensed and put on my shelves ASAP - from the obscure but well-deserving manga to the stream worthy but not yet DVD licensed anime.
At Japan Expo 2013, Viz Media did its usual release of licenses, both anime and manga. At their Shojo Beat panel, one of their license announcements was of a series already familiar to English readers: Kamikaze Kaitou Jeanne, an Arina Tanemura series previously published by the now-defunct CMX. Viz pretty much has become the authority on Tanemura's manga past and present.
But why should Maron and company be the only magical thieves who get a license rescue these days? There's another series, a Tokyopop series from the early days, that is worth getting a second look. This is Mysterious Thief Saint Tail/怪盗セセイント・テールby manga-ka Megumi Tachikawa, also known as Saint Tail to U.S. readers. Tokyopop marketed it as Robin Hood meets Sailor Moon, which isn't a bad comparison, but that might be selling the series short.


Saint Tail was one of the first manga I ever bought, so I certainly have an emotional attachment to it. But I really enjoyed reading it! I even enjoyed re-reading it years later when I rediscovered my old Mixx Manga issues of it in a box hidden away in my room. In an era dominated by the magical girl, Saint Tail set herself apart with her ability and her spirit. Plus, how many manga do you know take place in a Catholic high school and have one of the characters in habit? 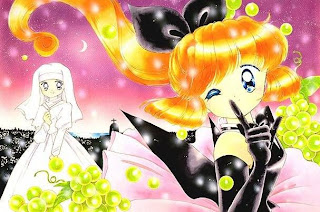 The story of Saint Tail is that of Meimi Haneoka, a young student at St. Paulia's Private School whose best friend is Seira, a nun-in-training. By day, she's an innocent looking girl - but when night strikes, she transforms into notorious thief Saint Tail, someone who the local police is constantly on the look out for. Saint Tail is no criminal, however; her goal is to steal back what has been taken away from people dishonestly. Her sidekicks are Seira, the magical thief's informant and the only person who knows Saint Tail's true identity, and Ruby, an adorable hedgehog.
Naturally, Saint Tail/Meimi has someone who is constantly trying to thwart her efforts, and he is Asuka Jr., who despite being the same age as Meimi is part of the police force as a consultant and detective-in-training. He's also Meimi's classmate and has no idea the girl who he goes to school with is the very thief he spends every night trying to catch. Over the course of the series, Meimi develops feelings for Asuka even as Saint Tail eludes his grasp. Wait, are we sure this isn't an Arina Tanemura manga?
The cool thing about Saint Tail is that unlike most maho shojo/magical girl heroines, she actually is not inherently magical. No one blessed her with a magic wand or foretold her destiny as the savior of the Earth. She just does it because it's the right thing to do. Saint Tail's abilities come from her amazing slight of hand and theatrical trickery that flummoxes her target and her police pursuers at the same time. Magic? Who needs magic? Saint Tail is doing fine without it. 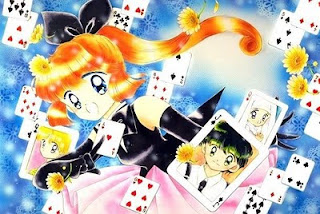 Saint Tail is a sweet, heartwarming, humorous series where good always triumphs over bad and anyone can be a hero if they have the right costume and know the right card tricks. It's always fun to read about Meimi and Seira going from one stolen item to the next, keeping Asuka Jr. and his police team in their dust. And who doesn't love a cute hedgehog companion named Ruby?
Published in Nakayoshi during the nineties, Saint Tail ran for a total of seven volumes, all of which Tokyopop published in the smaller format before it switched to reading right-to-left and the books fell into the now uniform size and shape. Tokyopop even published Saint Tail on a chapter-by-chapter basis for a while, along such titles as Sailor Moon and Card Captor Sakura.


Naturally, Saint Tail's manga is ridiculously out of print. I think the daily hijinks of Meimi and Seira would go perfectly with those of Maron and Miyako. Viz Media, are you interested? It's only seven books long!
Posted by Sarah at 6:48 PM