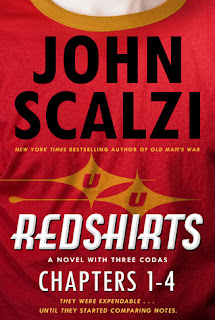 They were expendable . . . until they started comparing notes.

I'm tagging this as Star Trek because gosh darn it, it's the closest thing you can get to a Star Trek novel without actually being one. There might not be any characters named Spock or Kirk or McCoy, but you can tell who their counterparts are by the end of the prologue. If anything, Redshirts is a perfect pastiche of the Star Trek uniform, a love letter to the poor red shirt wearing security details who never survived the end of the episode.

Ensign Andrew Dahl is the latest arrival on the star ship Intrepid, and he is only starting to get settled into his new position when he realizes that life on the ship isn't as wonderful as it first seemed. Their captain is an arrogant blowhard with a melodramatic street, his lieutenant a cold-hearted non-human who is not as smart as he thinks he is. Naturally, when the shit hits the fan, it is Dahl and his fellow redshirts that get turned into cannon fodder for the sake of their superiors' well being. Sound familiar?

In four chapters, John Scalzi has already done some tremendous world-building, albeit on the back of a world meant to mirror the Trek!verse, created a diverse cast of characters, and set up the main conflict on which the rest of the novel will hang. There's a Narrative to be followed and those who don't adhere to it end up losing their lives in the process. How will Dahl escape the fate of so many redshirts before him? I'm looking forward to finding out.

The best thing about the first four chapters of Redshirts is that it is available for free, without DRM, on Amazon, Barnes & Noble, and the Tor website. So most of y'all don't have any excuse not to check this one out!
Posted by Sarah at 6:17 PM